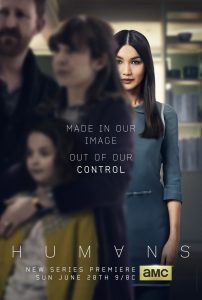 While a mildly entertaining show, Humans is not earth-shattering in its concept or execution, and its attempt at social/cultural commentary is similar to many other AI (artificial intelligence) movies or shows. If you’ve seen I, Robot, Battlestar Galactica, or even Star Trek: Voyager, you’ve essentially seen Humans. The one redeeming aspect of the show that made it worth finishing was the exploration of love between humans and their synths (AI servants). Humans challenges the viewer’s notion of love by asking if it needs to be reciprocated in order for it to be real and valuable. This approach is unique in that other depictions of artificial intelligence often imbue the AI character with human characteristics that make it inherently valuable. While this is true for the central synths of Humans, it is not true of them all (some synths remain robots controlled by their programming, while others become sentient/conscious and acquire free will).

Originally produced in the UK, Humans was picked up by AMC, and Amazon Video currently streams Seasons 1 and 2. Season 3 will premiere on AMC in 2018. Humans is a spin-off of a Swedish series called Real Humans that aired in 2012 and 2013 (this is a surprising amount of interest given the show’s lack of originality).

Violence: Almost every episode features violence in one form or another. In Episode 1, the synths are abducted and a malfunctioning one strikes a woman. In Episode 2, a synth is raped while being forced to work in a brothel. In Episode 3, someone gets hit by a car. You get the idea. At one point a synth goes to an underground synth-bashing ring and begins beating humans with a steel pipe. Synths often sustain “injuries” they don’t feel, like a toothpick in the eye or a cut on the hand. 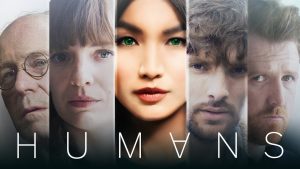 Sexual content: There is suspicion throughout the series that Laura Hawkins is cheating on her husband, but this turns out not to be the case. Joe Hawkins activates “adult” mode on his family synth, Anita, and has sex with her. Because of this, Joe and Laura split and there are frequent references to his cheating. There is no nudity and the sex act is not shown except for a few final thrusts. The eldest Hawkins daughter, Mattie, kisses a school mate. While at a party, Mattie observes a boy trying to undress a synth and stops him. Two police detectives investigating the rogue synths kiss and have sex, but their sex is not shown on screen.

Drug/alcohol use: No drug use. Characters are often shown drinking, but not to the point of drunkenness.

Other negative themes: The synth Niska uses the trust placed in her by the Hawkins family and other synths to deceive and steal from them. A police detective lies to her colleague so he will be attracted to her.

Positive Content: Family loyalty and friendship are used as motivators. The Hawkins family learns to freely seek forgiveness, apologize, and move on from past hurts.

As technology continues to become entangled in every aspect of life, it is not surprising a show like Humans would attract a large following. From the effect of AI on human emotions to the effect of human emotions on AI, Humans explores the potential interplay between fleshly life and mechanical life. Unfortunately, this exploration is often shallow, cliché, stale, predictable, and unoriginal. 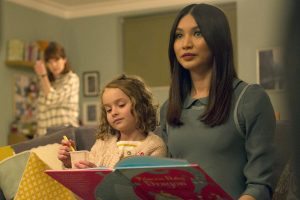 From the introduction of the overworked mom, the unsupportive husband, the unruly kids, and the attractive synthetic who will save them all, I knew what was coming: Husband suspects wife of cheating, wife hides some sort of past shame from her husband, kids blame one parent for all their problems, and husband has sex with attractive synth. All pretty standard fair.

Not only was the story progression typical of the genre, but almost all the actors themselves came across as somewhat inexperienced and unpolished. Take Mia, for example. She is a synth who gained consciousness, but was captured and reprogrammed to be a house synth named Anita. At first I thought the actress playing Anita was great, as she beautifully portrayed the synth as both robotic and surprisingly human. But when the Mia persona finally overcame the Anita programming, I realized the actress was simply that robotic in general, and frequently struggled to pull off a scene. Couple this with a moody and brooding teenage girl whose parents just don’t understand her, and you’ve got the perfect recipe for eye rolls and exasperated sighs.

The overall low-budget feel to the show extends to the sets and the soundtrack as well. The sets appear extremely basic and most are simply interiors of a few different houses. Only the last episodes offers up some uniqueness–when the main characters have to take refuge in an abandoned church. As for the soundtrack, it is very techno in nature, with a lot of synthetic instrumentation that I found to be terribly passé.

As for the writing, well, the discovery of the “root code” that gives the synths sentience is a tree…literally the code is in the shape of tree. Cringeworthy.

Humans explores the usual themes of a show like this, including: Have some robots gained sentience? (Yes they have.) Should we fear these robots? (Society at large says yes, but only because they don’t really know them.) Are people willing to sacrifice themselves for the safety of these robots? (Of course there is always a group of reluctant, yet sympathetic, humans willing to save the robots). Can humans love and be loved by robots? (Yup.)

Humans basically nails the recipe for a show about the development of AI to a T.

Only one aspect of Humans makes me inclined to recommend it: The idea that giving love to a created object imbues it with an 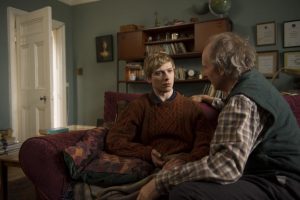 inherent value that is not dependent on whether it gives equal value to its creator.  Dr. Millican suffers from memory loss and has developed a paternal love for his synth, Odi, because Odi both holds the memories of Millican’s life with his wife and provides companionship: “I look at Odi, I don’t see a synthetic. I see all the years of care he gave us. All the memories he carried for me when I couldn’t. He can’t love me, but I see all those years of love looking back at me.”

This idea is juxtaposed against the fear of synths, these created objects, being able to become sentient and decide whether to love or hate their creator–then act accordingly. While this theme is the undercurrent of most AI shows/movies, adding Millican’s sentiment to the discussion brings an interesting dimension to Humans.

As a Christian it immediately made me think of the relationship between man (created, like the synths) and the creator (God, like the humans) and how the two perceive each other and interact with each other. Millican loves Odi, but there is a certain type of emptiness in that love because it is one-sided, and I couldn’t help but be saddened by this. Their relationship was safe and comfortable, but also unfulfilling and dull. Contrast that with the way the sentient synths related to the humans–they have the ability to either love or hate their creators and to save or kill them. This kind of relationship is far more tumultuous and less safe, but it also brings fulfillment and excitement. Our ability as humans to choose to love God or to reject hims make the relationship that much more valuable and meaningful, and this idea was reflected in the deep love formed between the sentient synths and humans.

While this dynamic was interesting to watch develop, I don’t think it justifies investing in the entire season. The underwhelming plot, the subpar acting, the less than enlightening themes, all relegate Humans to the realm of forgettable (so forgettable that I had to go on wiki sites to refresh my memory in order to write this review, and I just finished the show a week ago).

If you are hoping to watch a show that takes a new approach to AI, then you will likely be disappointed by Humans. Its depiction of synths offers nothing new thematically; however, the show is entertaining enough to hold your attention for the entire first season. But I'm not sure it's interesting enough to justify watching the second.