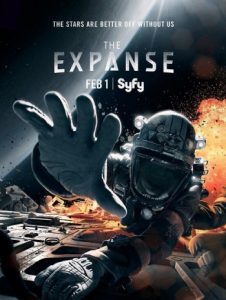 The Expanse is one of Syfy’s most successful original series to date. It is based on a series of novels that first came out in 2012 with the most recent book having been released in December 2016. There are three more books scheduled to be published, the next coming in December 2017.

The first three episodes were a little slow and so I had to power through them, but after that I was hooked and ended up watching the whole series in two days. Now I’m trying to decide if I want buy Season 2 or wait for it to come to Amazon Prime Video… Season 3 is scheduled to be released sometime in 2018.

Spiritual content: The system’s largest-ever ship is commissioned by The Church of the Latter Day Saints (LDS) so they can settle on a new planet in a different solar system, but the Mormons seem to be made an object of mockery and not recommendation. In fact, there seems to be no spiritual values championed in this drama. 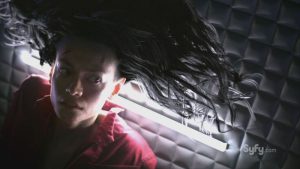 Violence: Frequent fight scenes with depictions of stabbings, fist fights, shootings, and one impaling. While these scenes are not gory, they are definitely bloody. There is some sort of mysterious substance that consumes people from the inside and leaves them with spider shaped sores all over their body.  An entire city is exterminated by this substance.

Language/crude humor: There is minimal cursing with only a few f**ks, s***ts, and d***ns scattered around. Miller alludes to his partner’s’ potential sexual relationship with a prostitute a couple of times. The Belters speak in their own patois that is subtitled and includes some of the above expletives.

Sexual content: There is one instance of a couple having sex in a zero gravity environment; no breasts or graphic depictions of the act are visible, but their nakedness is seen from afar. A few scenes take place in a brothel, but with no nudity or sex on screen. 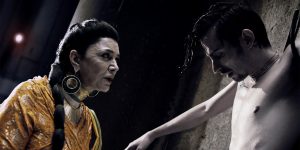 Drug/alcohol use: Drugs are frequently used, mainly as a remedy for something like space madness. Many scenes take place in various bars with people drinking, but not to a point of abrasive drunkenness.

Other negative themes: As a borderline corrupt cop, Miller takes bribes that lead to innocent people getting injured. An Earth official deceives a childhood friend which leads him to commit suicide (so she thinks).

Positive Content: Friendship and loyalty is demonstrated among the remaining Canterbury crew. There are frequent instances of “bad” characters doing the right thing, simply because it’s right. Pursuit of the truth is valued even when the circumstances are difficult and dangerous.

In many ways The Expanse is a run-of-the-mill space odyssey with a hero who finds himself responsible for the salvation of humanity, is accompanied by an attractively misunderstood female sidekick, and who constantly laments how he never asked to be a savior. James Holden (the “hero”) is tolerable because he is on the screen about half the time. However, the extra elements are what altogether make The Expanse a unique and enjoyable show: interweaving of different story lines, standout supporting actors, and the innovation of Belter patois. 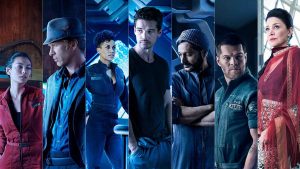 The Expanse was able to pull off the difficult task of presenting three distinct story lines seamlessly, by giving each story a complete background and fully developed characters all while contributing momentum to the central plot: who destroyed the Belter ship? This is the question directly driving Holden and the other Canterbury survivors who initially suspect Martians of the crime, but soon discover that the Martians are just as confused and are also searching for the perpetrator. Holden’s focus shifts to the OPA, a Belter terrorist group seeking independence, but once he and his friends are forced to take refuge with an OPA operative, again they question who is really behind the attack. The OPA asks them to go on a rescue mission with a promise that answers will follow, and this is where Holden’s story line first intersects with Miller’s.

Detective Miller’s life as a Belter cop is far from honorable. He regularly takes bribes, beats suspects, and avoids confrontation with criminals. But his interest is piqued when his commanding officer asks him to go looking for the missing daughter of one of wealthiest men in the solar system. As an OPA sympathizer she is suspected dead, but Miller continues his search for her and in the process meets Holden. They were unknowingly searching for the same girl who they find dead by some strange substance that seemed to kill her from the inside out. Miller and Holden flee after discovering the dead girl, and finally it is Chrisjen’s pursuit of the truth and Earth’s safety which provides the main story arc that the others fit into.

As a high ranking Earth politician, Chrisjen works tirelessly to discover who is behind the Canterbury affair. She worries that it could be the end of the cold war that has existed between Earth and Mars and fears that the OPA is attempting to manipulate the two sides into conflict. Chrisjen’s role as a wife, grandmother, and friend conflict with her role as leader, and she often sacrifices her relationships in an effort to protect Earth. Chrisjen is the reason that I thoroughly enjoyed The Expanse on an intellectual level and I’m eager to see how her character develops. 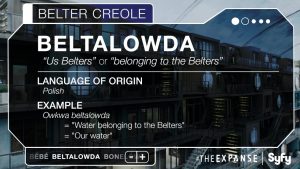 One detail of interest addressed by The Expanse is gravity within ships. At times it seems as if there is a Star Trek-esque gravity plating that simulates gravity throughout the ship. But at other times the characters seem to use gravity boots inside ships, and so unfortunately I was left a little unclear about this aspect of The Expanse universe. The CGI for this and other effects was acceptable, being neither noticeably poor nor spectacular, while the sound track was lackluster.

Throughout the season Belters speak in their native patois, which is a combination of multiple Earth languages including French, Italian, and Jamaican patois. This is the exclusive language used between Belters (with frequent subtitling) and when they speak in English with Earthers or Martians they still tend to have a very heavy accent. I love it when shows create their own languages (yes, I admit I have studied Klingon). The writer and linguist Nick Farmer has done a great job in expanding the smatterings of Belter that originally appeared in the novel, even following this up with regular posts about Belter vocabulary and grammar on his Twitter. I’m eagerly awaiting the first Belter 101 language study.

Overall, The Expanse is entertaining and well done. The stories of each episode, though in themselves being mundane, contain an engaging and ongoing whodunit mystery aspect. I will probably not pay for Season 2 on Amazon Prime, but I will watch it as soon as it is available to stream.

From the tension of Miller’s struggle with his identity as a Belter, to the troubling implications Chrisjen’s “the ends justify the means” philosophy, The Expanse is a show worth watching.