WWE Money in the Bank Predictions

This Sunday is WWE’s Money In The Bank PPV. Since it’s inception in 2010, this PPV has always promised to be entertaining. In 2011, CM Punk famously “walked out” of the company with the championship in hand and an expiring contract leaving WWE without a champion (or a belt). That same show saw Daniel Bryan winning his shot at the World Heavyweight Championship which he would go on to win later that year.

The show is named after the Money in the Bank (MITB) ladder match that originated at Wrestlemania nearly a decade ago. The winner of the match holds a briefcase which contains a contract good for a championship match at any time, regardless of the current champion’s condition. This has led to many moments with surprise “cash ins” and new champions that often turn an unremarkable episode or PPV into history-making excitement.

This year’s show started out lackluster due to aforementioned champion, Daniel Bryan announced that he had a legitimate neck injury and would be unable to compete for an unknown period of time. The MITB ladder match looked to be replaced with a match for the championship instead. However, in this last week WWE added back in the match for the briefcase, so we will have two ladder matches on Sunday: one for the title and one for the briefcase. The rest of the card has been filled out last minute as well. 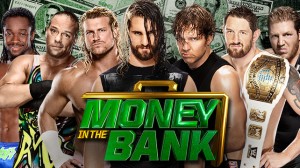 Money in the Bank Contract Match

This will likely be the opener. Simply based on the participants in this match it is guaranteed to be match of the night. Kofi will pull off some crazy stunts involving one or more ladders. Ziggler will put his body on the line yet again and likely get concussed trying to steal the show. Seth Rollins will jump off the tallest ladder WWE can find. All of the great spots will be there.

In terms of outcomes, it is easy to eliminate Kofi, RVD, and Swagger from the winning picture. Also, I’m afraid I’ve got some bad news, as it is rumored that Bad News Barrett was injured this week and may be pulled from the match. Before hearing this, Barrett was my favorite to win this match. That leaves Ziggler, Rollins, and Ambrose.

Ziggler is a former MITB winner and champion that has been plagued with concussions and injuries. He is among the most talented on the roster and gives it his all for the crowd, even if it is obvious that he will lose. WWE management has been accused of holding him back, but the fans love him no matter what position on the card he is given. Will this be Ziggler’s chance to shine at the top?

Seth Rollins and Dean Ambrose are in the middle of a feud after the break up of their team, The Shield. Both of these guys were raised on the independent wrestling scene and can put on a match unlike many others. Rollins may have some terrible entrance music since he no longer comes out to The Shield theme, but he has all the right things going for him. The fans hate him for destroying the best group WWE has seen in many years. The COO of the company, Triple H has given him an official endorsement. Dean Ambrose, meanwhile, has been receiving a surprisingly favorable reaction from the crowd since he has received more attention being a singles competitor now.

My view on this match is simple, if Barrett is still in, he wins. Barrett is on his way up and why stop him here? If Barrett is injured, I foresee Seth Rollins pulling off a calculated victory and further establish that he was the brains behind the operation of The Shield.

Either way, Rollins and Ambrose will likely continue to feud, Barrett will still be Intercontinental Champion, and the rest of the competitors will go back to the undercard where they have been for months.

Winner and this year’s Mr. Money in the Bank – Barrett or Rollins, depending on Barrett’s status

We saw this match last PPV and I expect it to be no different this time. It will be a short match to calm the crowd down after the excitement from the MITB contract match. Rusev will win this with yet another Accolade.

Goldust and Stardust vs Ryback and Curtis Axel

Stardust is the best new character going in WWE. I suppose part of that could be that I have not had enough time yet to grow sick of him. In all seriousness, Cody Rhodes has changed his look and, more importantly, his moveset in a major way with this new character. Goldust has been putting on great matches this past year and I fully expect 100% from him on Sunday. Even Rybaxel have greatly improved as a tag team together.

The smart move would be to put the winners of this match against the winners of the tag title match at the next PPV. If my prediction below is true, there can be only one outcome here. Especially with the new momentum behind the brothers Rhodes.

This is a match that could surprise me. I love Luke Harper. He has a distinct look, he is not too terrible in the ring, and he has proven his worth on the mic in recent months. The Usos have started to grow on me after a few years and the two of them can pull off some great matches. Erick Rowen is not bad, he just gets overshadowed by Luke Harper and their leader, Bray Wyatt.

I can easily see the Wyatts taking the titles from the Usos. Beyond being Bray Wyatt’s lackeys, Harper and Rowen have started to really shine on their own. These guys are more than deserving to be called the best tag team in WWE today, especially since The Shield is no more. Plus, it will make it all that more intimidating when they flank Bray Wyatt with the titles around their waists.

This is your bathroom break match before the main event. I doubt WWE will make the switch with the title and I predict Paige going over. In all honesty, I don’t actually care either way in this match. The WWE has ignored their woman’s division for so long that I have started to as well. 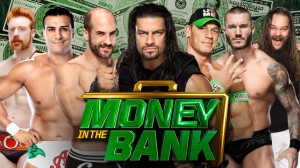 Let’s start with who has no chance. Kane was a last minute addition and can not be taken seriously to win. Sheamus and Alberto Del Rio have similar odds. A win for Cesaro would make me jump out of my seat in excitement, but it is not likely to happen. That leaves only four.

Roman Reigns has been booked as the strong favorite going into the PPV to win this match. If WWE logic holds true, that means Reigns absolutely will not win this match. Instead, I see Triple H getting involved and screwing Reigns by pushing him off a ladder or hitting him with a sledgehammer. This would be a good way to set a feud between the two leading into Summerslam.

Never count Randy Orton out. I may find him incredibly boring, but he can put on a great match and has a lot of pull backstage. Were this any other situation, I would not be surprised to see Orton win this. The reason I do not expect him to pull it off is because of the scenario below.

Bray Wyatt has been on a roll since the beginning of the year. He has brainwashed the audience into following him using cult leader tactics and has stood toe-to-toe with John Cena on many occasions without coming out looking weak. I would love to see Bray get the payoff of his career by winning this and becoming the “Face of WWE”.

The one kink in my prediction is that WWE has already confirmed John Cena vs Brock Lesner for Summerslam in a couple of months. With two big names in a match like that, why would they not want it to be for the title? I see Cena as champion going into Summerslam in August. The only question: when?

It is always possible that Wyatt can win on Sunday and continue his feud with Cena for the title. Cena would end up taking the title off of Wyatt in time to face Lesner. It is not my favorite outcome, though it is a likely one.

While I feel less amped for this PPV as I have in past years, I still look forward to a solid B show. 2014 has been a great year for quality shows from WWE. Let’s hope the streak continues with Money in the Bank on Sunday.

What are your thoughts on the line up and possible outcomes?

Until next time, I leave you with this: 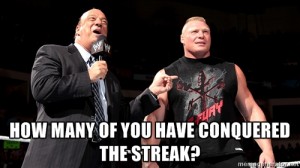 All photos courtesy of wwe.com