The level of freedom that games give a player is often referred to as player agency. Player agency contributes to the enjoyment of a game, whether it’s an open world or a rail shooter, and the amount of agency desired in gameplay varies from player to player. Mark Dabrowski created Streets of Rogue with the idea of making a roguelike/roguelite that gives the player lots of agency. The end result is a game whose free-form design encourages creativity, and which possesses a strong AI (artificial intelligence) that makes its world come to life. Despite this, however, Streets of Rogue may have limited appeal due to its roguelike gameplay.

Streets of Rogue’s free-form gameplay leads to a lot of questionable content because the player can choose to make many good and bad moral choices. The storyline of the game doesn’t push the player to play one way or another, which means it doesn’t encourage good moral choices over bad ones. The game is rated Everyone 10+, and I would recommend this game to older kids on up.

Violence: The majority of the questionable content comes from the violence portrayed in the game. Players can attack anyone or anything in the game. Some of the NPCs (non-player characters) will runaway, but some will fight back. When the player kills an NPC they mostly fall over sideways. If the player continues to attack the dead NPC or if the player use explosives the NPC will explode into a bloody mess. The 8-bit graphics aren’t very explicit, but when the NPC is reduced to a bloody pile of red chunks it’s unmistakable.

Drug/Alcohol Use: Drugs and alcohol play a major role in the gameplay. Some characters start the game with bottles of whiskey and beer as a part of their loadout. A playable character receives a health boost from drinking alcohol as well as eating food. Drugs can be found throughout most levels, and in each level a drug dealer sells drugs and gives out side missions. Cigarettes can also be found throughout the levels.

Other Questionable Content: The near future world of Streets of Rogue contains slavers who sell human slaves which the player can buy. The slavers wear black uniforms and masks which look similar to those of executioners. It’s not clear how someone becomes a slave, and there doesn’t appear to be any racial bias as slaves are a random assortment of races.

Positive Content: As I stated earlier, Streets of Rogue doesn’t encourage players to act in any particular way. There are bonuses for destroying levels, but there are also bonuses for getting through a level using no violence. The player can use non-violent means to achieve objectives, though it might require some extra thinking to come up with a solution. Players work for a resistance group trying to free the city from an oppressive mayor, so there’s a freedom fighter vibe to the storyline. 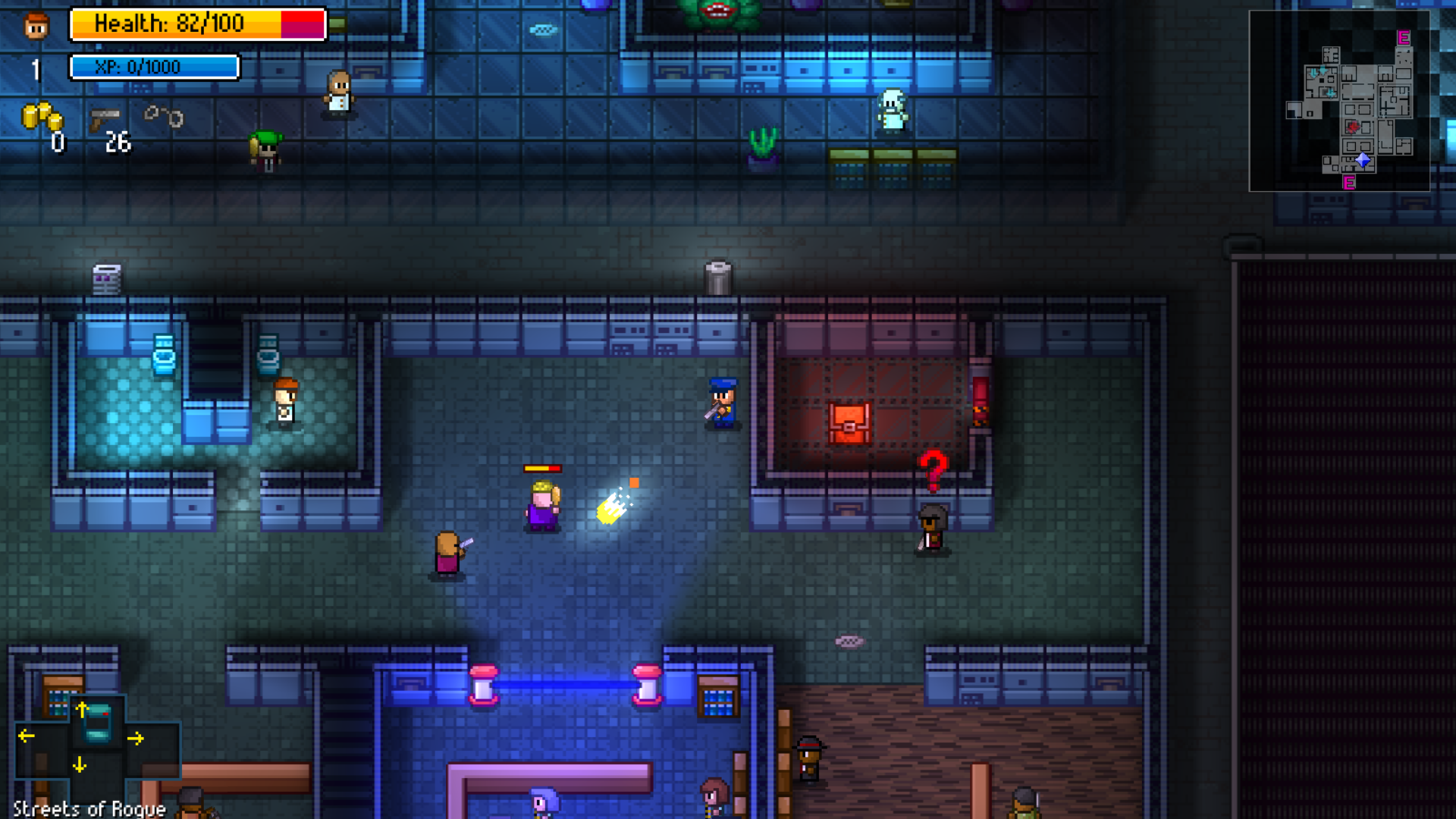 Gunfight in Streets of Rogue

Streets of Rogue takes place in the near future and in a nameless city whose oppressive mayor has taken away everyone’s alcohol and fun. The story doesn’t take itself seriously in the slightest. The player starts the game by meeting up with a member of a resistance force and then running through a short tutorial mission. Once that tutorial mission is over, the player gains access to the home base where they can choose a starting character as well as purchase bonuses or perks. 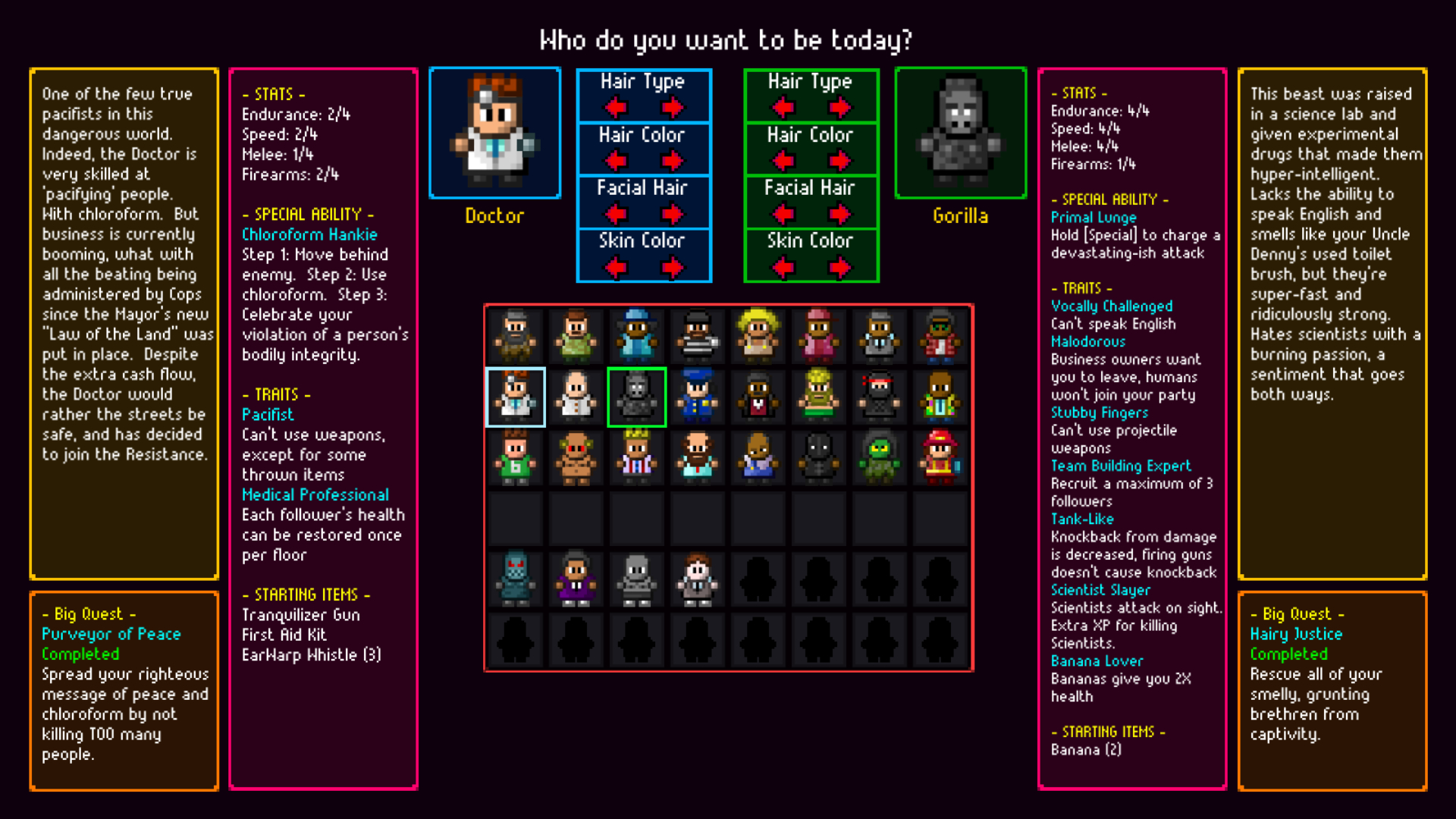 One of the core elements that makes Streets of Rogue a roguelike/roguelite game is permadeath, wherein the player loses all progress when they die. Characters start with a basic loadout which is different from character to character; Soldiers, for example, start with a machine gun, grenades, and landmines, while the Thief’s loadout includes a crowbar, lockpicks, and glass cutters. Each character can be played in whatever way the player wants, but the starting loadouts help with certain playstyles. When a player completes a level they get to choose a trait to enhance their character. 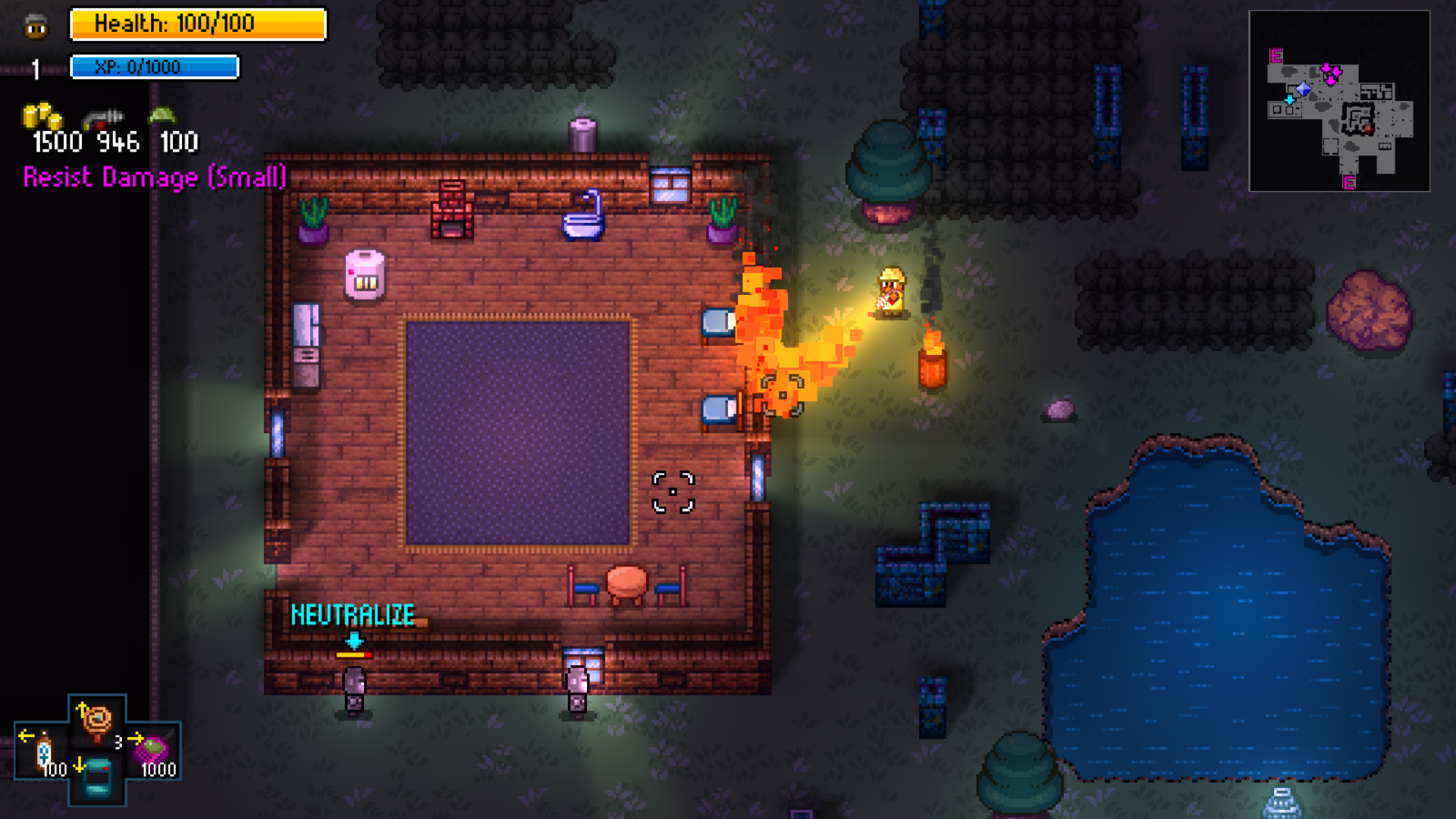 Playable characters each have their own unique abilities, such as Pickpocket for thieves or Arrest for police officers. That doesn’t stop players from doing whatever they want to do. A player could go through the level killing everyone they come across, or interact with the level in many different ways. There objectives that need to be finished in order to move onto the next level, but those objectives are loosely defined. One such objective may be to neutralize an NPC, which can be done many different ways; a player could take them out by killing them outright, they could encourage others to kill the NPC, or they could create an accidental situation to achieve this same end. The other objectives include flipping off switches or retrieving items from NPCs. All the objectives have multiple ways of achieving them.

The levels are all procedurally generated, but they are grouped into similar looking tile sets which change as the player moves through the city. The best way to understand this is to think of the tile sets as floors in a building. Starting with the slums, each tile set has three floors that then lead to the next tile set. All the tiles sets have similar NPCs and buildings, but they will be procedurally generated each time. The third floor of each tile set has a unique twist such as riots, missile attacks, or creeping ooze. 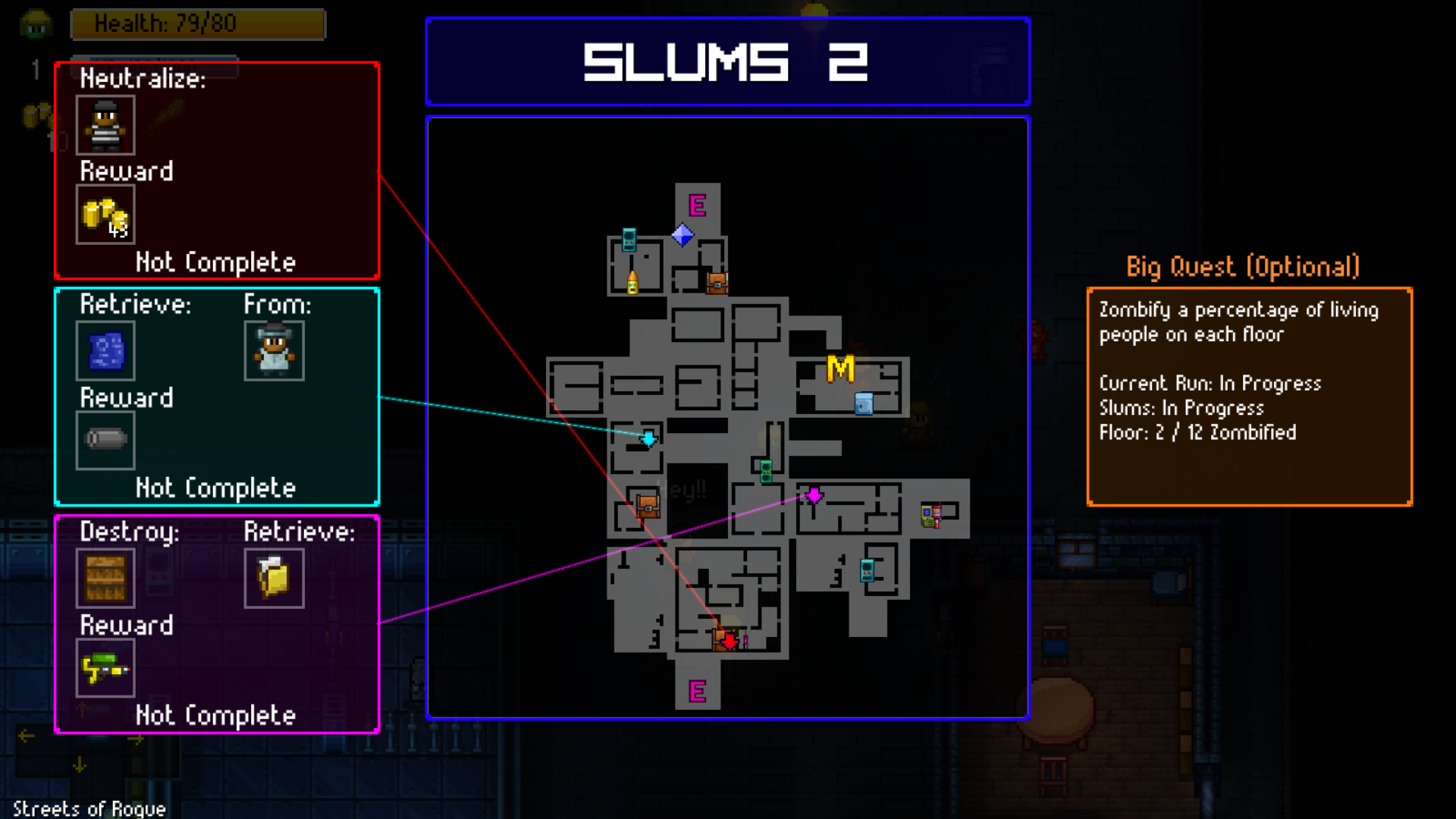 Streets of Rogue appears simple on the surface, but takes a lot of planning in the end. The AI for the NPCs brings the game to life. Guards turn around if they hear a tap on a window, and shop owners react to players trying to get into the back rooms. Some NPCs will try to fight the player, while others will run away to find help. One thing I found that I needed to watch out for was getting bumped into other NPCs during a fight. If I bumped into some NPCs they might also try to fight me, and shortly thereafter I could find myself in the midst of a mini-riot. Sometimes I would have to run away while the NPCs chased after me, and I couldn’t always shake them. I died many, many times in the first few hours just by getting into the wrong fight. 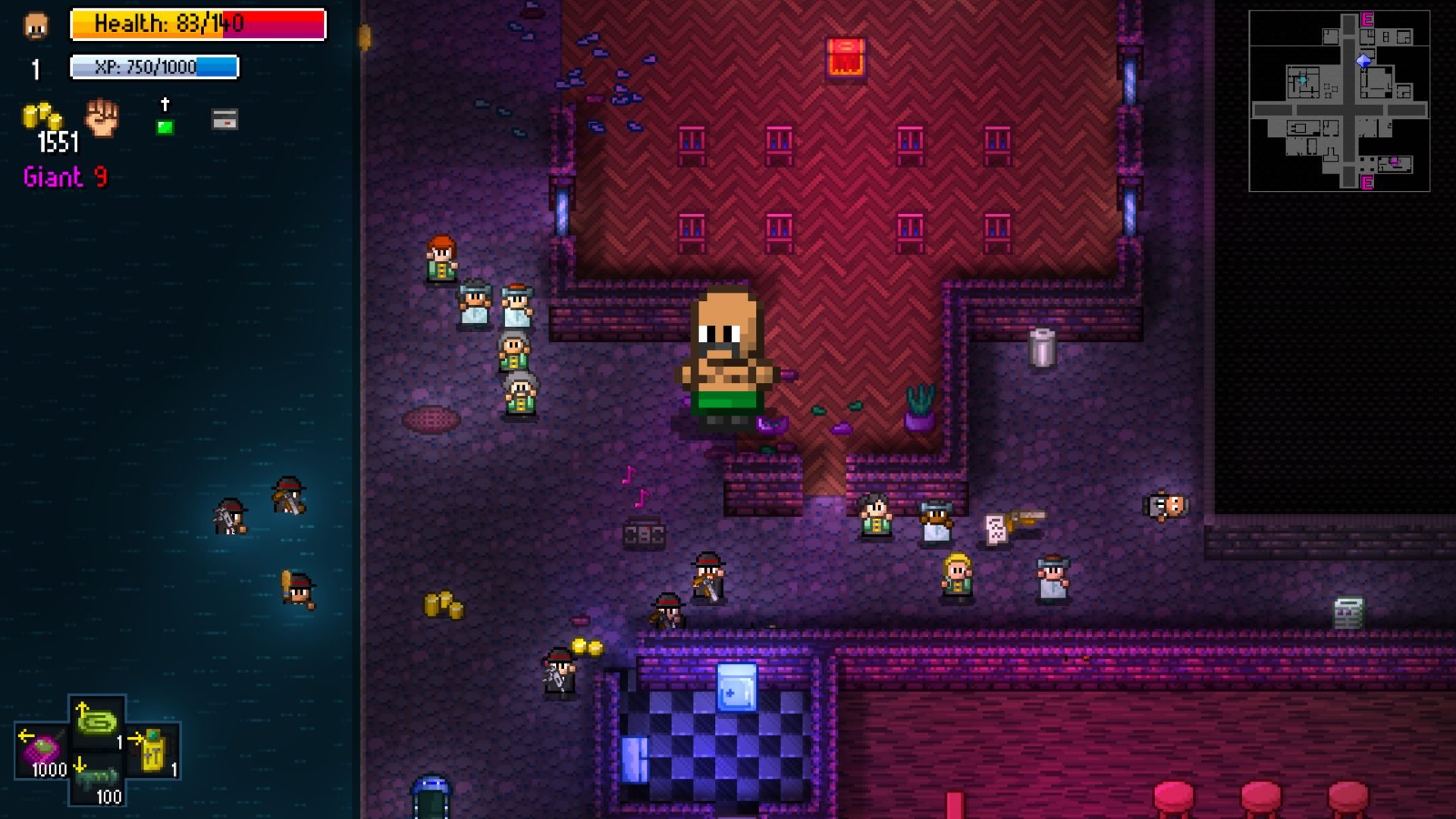 Giant pills have a great effect

The game’s roguelike elements can grow tiring after a while of playing through the same level over and over again. The 8-bit graphics are very simplistic but also colorful. There’s no animation for moving, and when the player attacks with a fist or melee weapon it looks like the weapon is sprouting from the characters body. The soundtrack became a bad earworm on account of the number of runs that I could do in an hour; I prefer to mute the music and play the game with my own playlist. 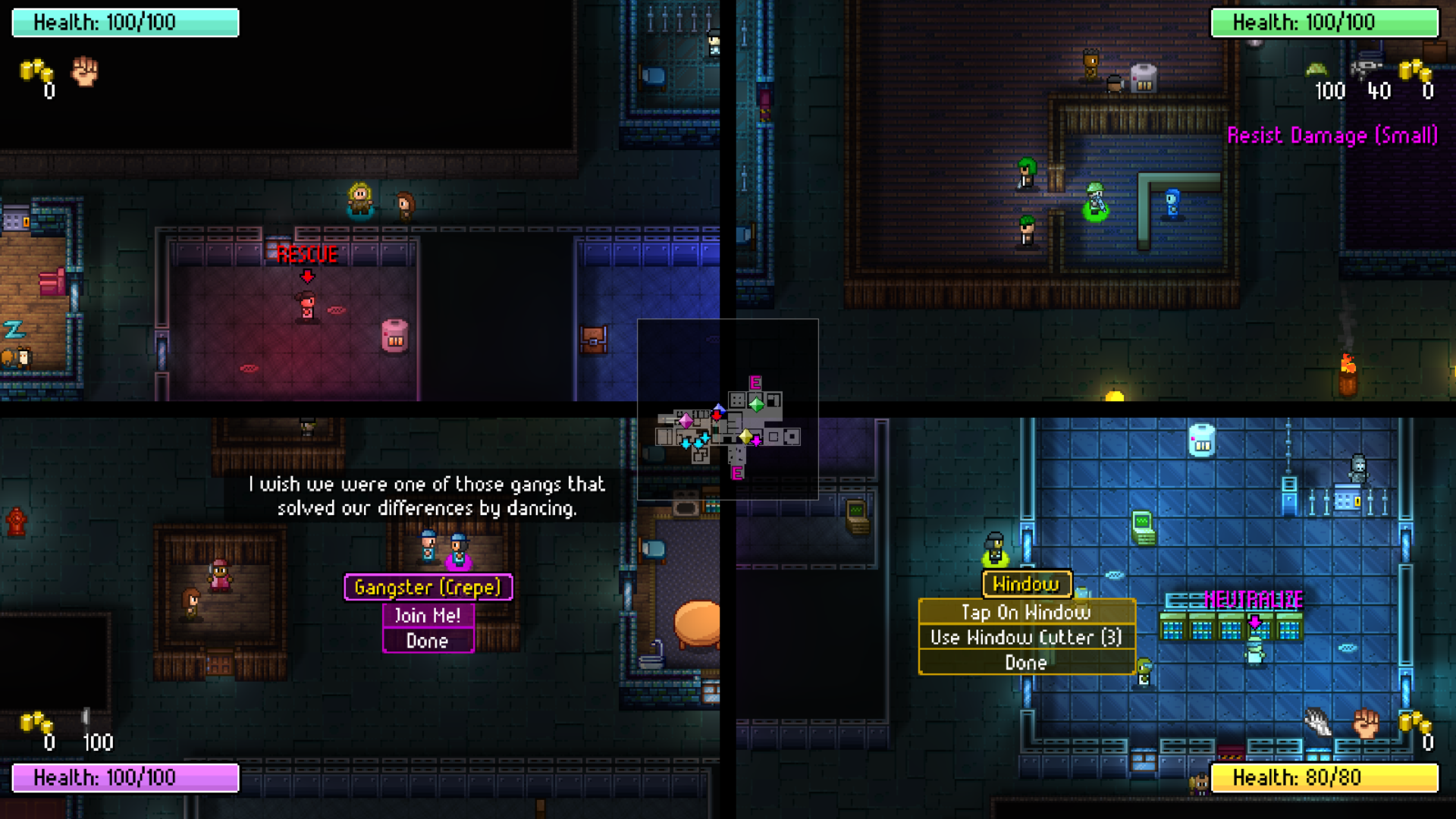 The other game modes include a four player co-op for local or online play. I don’t think there’s a big community of online players yet because finding an open online game was hard. I wasn’t happy with online play when matched with random players. When someone dies in co-op mode another player can revive them for a cost, but more often than not my teammates would ignore me when I died. All my items would become available to take, so on more than one occasion my fellow players would take all my stuff then leave me as a ghost wandering the game. I wasn’t able to try local co-op, but I imagine that playing with friends would lead to a better experience. Another gameplay mode that Streets of Rogue offers is a daily run where gameplay is slightly altered. In this mode, all the NPCs may want to fight the player, or werewolves could be hidden in the populace, to list a couple examples. 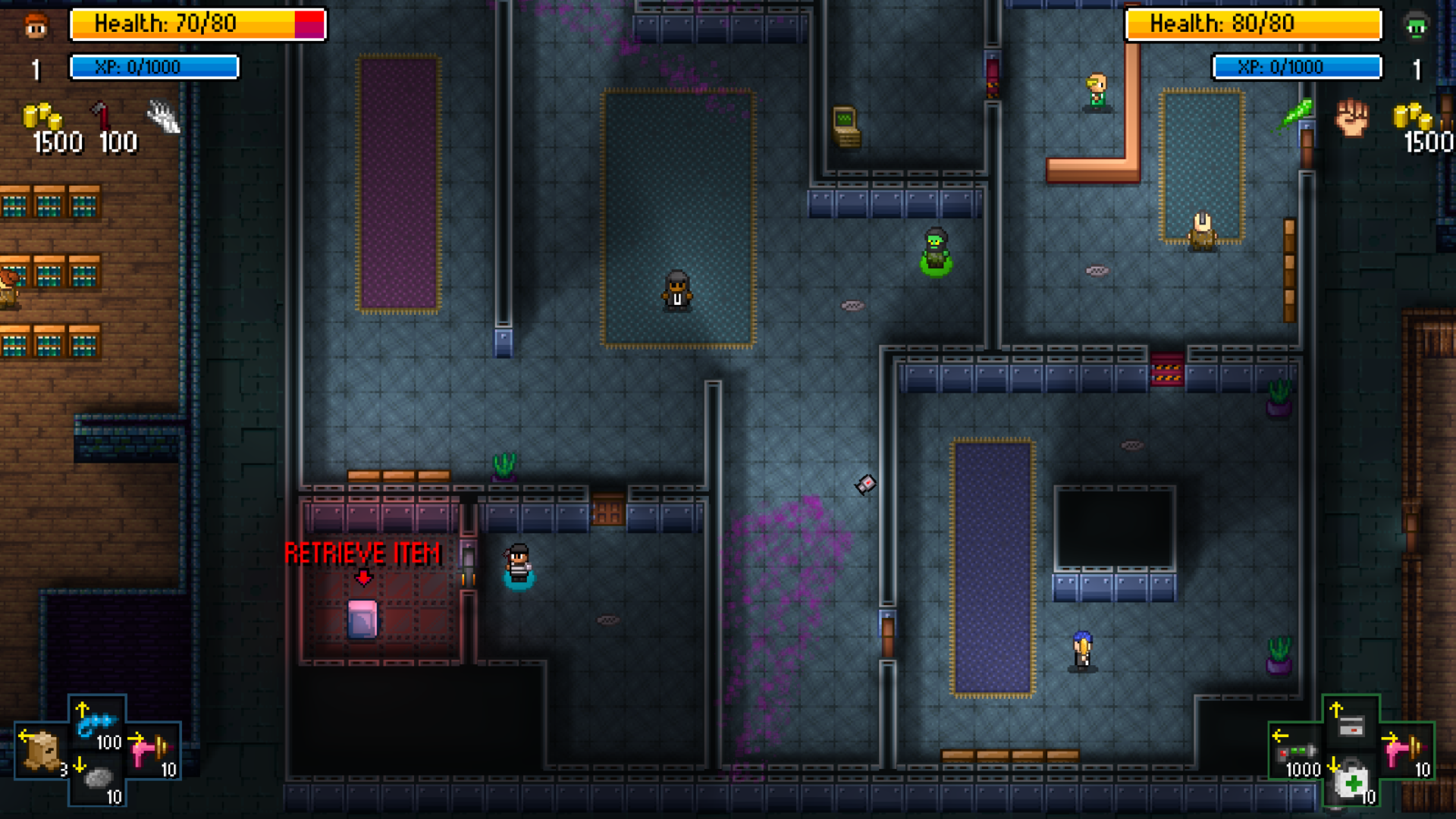 Overall, Street of Rogue creates a really great sandbox in which to play. While I didn’t like playing levels over and over again, and I wasn’t impressed by the graphics or soundtrack, the open nature of the objectives and the intelligent AI make the game feel alive. Players who really like other roguelike/roguelite games will find hours of enjoyment unlocking each playable character, tileset, and trait. Streets of Rogue may not be for everyone, but it’s worth trying out.

Streets of Rogue is a great roguelike/roguelite game with challenging AI and lots of player agency.