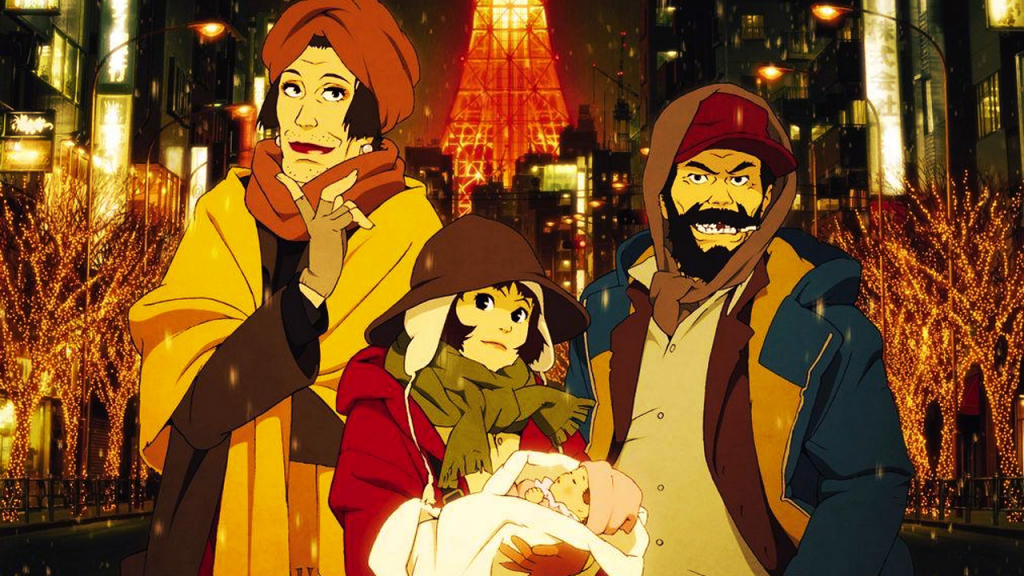 The late Satoshi Kon saw no shortage of accolades in his lifetime. With only a small handful of movies and a serialization to his name, he is now branded among the ranks of anime’s greatest directors. With a sharpened sense for dark, cerebral material that dissected the cognitive and emotional psychology of trauma victims, Kon became synonymous with storytelling which went a cut deeper than most of his contemporaries. Yet, among his small gallery of films, there is a black sheep—a picture which is definitively Kon-esque, while maintaining a tone and style which deviates from the rest of his filmography.

In 2003, Tokyo Godfathers brought us an upright narrative about sideways people. It told a “what-if” story: what if a runaway teenager, a middle-aged alcoholic, and a trans woman/former drag queen found a newborn child while rifling through trash on Christmas Eve? That story could weave a couple different directions, but Kon decided he’d take this cast of patchwork, societal losers and make a story about family. Specifically, how family means whatever you decide it means, and how it can help us find ourselves. 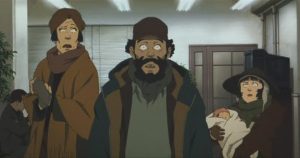 Spiritual Content: A trans-woman refers to herself as a mistake by God, and playfully inquires about whether a homosexual could become pregnant if the virgin Mary became pregnant. There’s a scene where characters pray at a Buddhist temple. One character comments about a pastor when asked why she didn’t attend church, stating: “I hate that Bible thumping.”

There is positive spiritual content, as well. Many times when something meaningful, important, or especially heartwarming happens, Hana, the aforementioned trans-woman, genuinely credits it all to God in some way or another.

Violence: An ambulance suddenly hits a convenience store. A couple is randomly hit by a passing scooter and it’s not addressed (I’m pretty sure this was meant for comedy). Two people throw fists over a petty squabble. We see a flashback of one character stabbing their father. One character is shot to death with a gun. Several adolescents mug an old man and kick him on the ground.

Language/Crude Humor: I took a tally of profanities and related material, but frankly to outline the entire list would be absurd. In short, if you have a strong aversion to vulgar dialogue or crass jokes, don’t watch this film. It’s rife with both.

Sexual Content: Scene with close-up breastfeeding on camera. A woman’s underwear is examined, albeit not in a perverse way. One character grabs a woman’s chest. Various comments of generally crude sexual nature, such as: “close your legs, act like you’re a woman.”

Drug/Alcohol Use: One character is drunk twice. We learn one character split up with his wife because of a history of drinking and gambling. A few scattered scenes where alcohol is present, even if not focused upon.

Other Negative Themes: A grief-stricken mother steals a baby and, when she’s about to be caught by authorities, attempts a homicide-suicide with the baby in hand. There’s a lot of generally sad storytelling from the characters. Hana becomes sick and starts coughing blood.

Positive Content: Tokyo Godfathers is chocked-full of redeeming moments and random acts of kindness. In spite of its depressing and often harrowing events, it still does everything in its power to maintain an overall tone of hope and cheer. There is familial love in many forms, forgiveness, showing grace to oneself, and a message of preserving life for the sake of life itself. 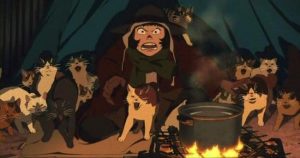 Before proceeding, I want to make a quick disclaimer that to appreciate the goodness found in this film, one must first be willing to step into the awareness that the world is full of broken people and twisted places. While this is not an especially morbid story, it does follow people who are culturally abandoned and carry the weight of heavy histories. This has lead to each of them donning a certain, natural worldly decline in their temperaments and behaviors. A decline which this movie very specifically means to show is not all they have to offer.

Not to recount the plot line-by-line, but Tokyo Godfathers begins in an especially notable setting: a church service on Christmas Eve. This is an unusual locale for anime. In attendance is our motley crew, who have no reservations about giving their two cents about everything the church’s pious leader has to say. They are then treated to a warm meal outside, and soon after go rummaging through strata of garbage, where they find a small, newborn child. From there, the madness of the next few days unfurls, and these people are rushed through a sequence of events, which as one of them notices, are almost provident in nature. 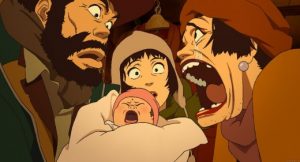 Gin is a middle-aged drunk whose best years are behind him in the form of cold ashes left over from the fires of his mistakes and addictions. Hana is transgender, a former drag-queen, and ostracized for both. She also dreams of being a mother, yet is well beyond the age where that option is conventionally available. Last is Miyuki, the runaway teenager who violently assaulted her father and cannot face the ghoulish decisions of her past. With their powers combined, they are an absolute, lovable mess of fools simply trying to find their way in a world that doesn’t want them anymore.

It is in the darkness of their hardship that the themes of kindness, love, and forgiveness can bloom, which give Tokyo Godfathers its identity. It is in the reckless hope of the foolish that lives are changed.

One especially memorable scene from this movie, at least on my viewing, was a beautiful interaction between a Hispanic and a Japanese woman who can’t understand each other, and because they cannot communicate with language, they must rely on other means. With this wall removed, they are able to quickly make a connection, thus allowing one of them to be transparent and honest for the first time in a long while. It is things like this—the nuanced individual character threads and how they weave into the greater fabric of the narrative—which made me appreciate this movie as much as I did.

Stylistically, Kon brings a lot to the table with this film. For starters, you may notice that nearly all of the colors in this film are dark and muted. Each of our protagonists are cowled in one of the primary colors as part of their character design, but a cold shade of each, a reflection of themselves and the world which has trapped them in poverty. The aesthetic of winter in Tokyo is delightful, with the snow often accenting the lighting effects of nearby buildings, and every character is brimming with detailed facial expressions. There is one bit in the latter half of the film where we have a lingering shot of Hana as she goes on a tirade, her emotions captured marvelously in fluid facial animation and bodily motion.

The music is serviceable, but short on character when compared to the cast it’s working with. There was, however, a sharp attention to sound detail in this film, which music would have distracted from. I cannot be certain, but I suspect this was an intentional directorial choice. The sounds of Tokyo were especially entrapping, with enough sonic weight behind every scene to really pull the audience into any given scene.

The camerawork and scene layouts shone with the proficiency of Kon’s legendary directing, though with my inexperience this is something I can only tangentially praise. However, one scene where a character jumps off a building in pursuit of something which is falling from it, was standout in this regard. The camera moved, untethered at their back, then flew down with them before looping in an arc to better capture the moment of landing. It was superb, which is probably why a piece of it is used in the trailer. 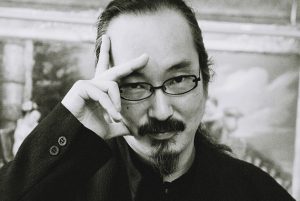 All-in-all, this is a film about the characters. While the plot is fantastic, the directing is esteemed, and the animation is stirring, what Tokyo Godfathers is largely about is the antics and warm-blooded sentimentality of these goofballs and the power of miracles, both natural and divine. It’s the majesty of forgiveness in the Christmas season, and grace between friends.

Personally, this is my favorite Satoshi Kon film, and I’m glad I still haven’t seen his television series Paranoia Agent, because it gives me something to look forward to watching. Cancer might have stolen him away prematurely, but not before this one man with a vision was able to leave an impact on the entertainment climate of the world.

Rest well, old man. Thank you for your weaponized honesty in a medium saturated with lackluster ambition.

“Being able to speak freely is the lifeblood of love.”