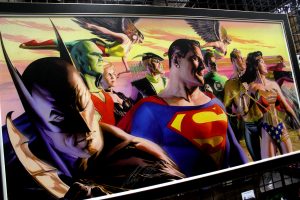 My entire existence can be characterized by three things: I am Christian, a musician, and I love superheroes.

Why superheroes (besides their obvious awesomeness)? Because the superhero genre is all about fighting the forces of darkness in the world. They are in the business of saving lives, and we do the same things as Christians – if on a less cartoonish scale.

For people like me, it’s an exciting time to be alive: We are living in a second golden age of superheroes.

It’s not just solo stories that have been making it big all over Hollywood. In fact, we’re seeing myriad teams of superheroes lighting up the big and small screens all over the world. Of course, we’ve got the A-list blockbusters: Marvel’s Avengers and the X-Men, DC’s Suicide Squad and Justice League, and even the Teenage Mutant Ninja Turtles.

There are also a ton of teams getting featured on television. We’ve got the bold, albeit vacillating quality, of the CW’s take on the Justice League, which encompasses the Green Arrow, The Flash, Supergirl, and the ragtag and oddly hilarious Legends of Tomorrow. On Netflix, there’s Marvel’s Defenders, featuring Daredevil, Jessica Jones, Luke Cage, and Iron Fist…and more are sure to come.

In fact, it’s because of these brilliant and many-varied secular groups I decided to create my own faith-based superhero team. (Shameless plug: Check out the Fearless Nine!)

When we as Christians are fighting a battle so similar to those we see taking place on our screens, it’s imperative we apply the lessons learned in our imaginations to our own lives. The following are just three concepts we can take away from our super friends.

Ours is a broken world that often falls victim to the many and ever-present forces of darkness. That much will always be true, until Christ returns or we are reunited with God in heaven.

But when the world needs us most, we will hold firm. We will stand together. We will defend the kingdom of God as stalwart heroes in the night – and we will do so together, with our brothers and sisters in Christ by our sides.

Annie M. Pasquinelli is the worship and media director at a small church in Eugene, Oregon and the author of the Fearless Nine book series about a team of faith-based superheroes. She is also a scuba diver and a graduate of Oregon State University.