The narrative is nothing special, but at least it’s clear and to the point. Not really spoiling anything, Delsin finds himself with the ability to absorb powers from other Conduits (people with superpowers).  How he is able to do this is left completely unexplained and is one of the only really important parts of the entire story, so that’s irritating.  However, his goal is simple: find a lady named Augustine who has caused grief for his clan, steal her power, and reverse the damage she’s done to the aforementioned clan.  Only problem is that Augustine is a very powerful Conduit and the leader of the D.U.P., an enforcement agency that specializes in taking down other Conduits, as well as promoting social stigma towards the super-powered minority.  Along the way, Delsin tracks down and borrows powers from a couple inmates who have escaped from Curdun Cay, Augustine’s Conduit detention center.

There you go, that’s it.  That’s pretty much the entire story.  After freaking out over (and rapidly growing to love) his new transformation, Delsin and his brother, Reggie, go on a misadventure into D.U.P. occupied Seattle in order to find Augustine, and are met with resistance.  Most of the story revolves around Delsin finding the other inmates, trying to befriend them, and otherwise removing the D.U.P.’s presence from the city.  Backstories are revealed for the characters upon absorbing their powers, but not much else is developed in most cases.  There’s a bit of a twist at the end, but it’s nothing too mind-blowing. 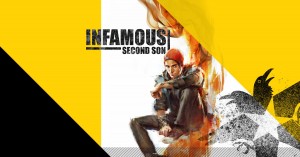 The pacing is very fast and very focused on getting you involved in the different powers available. As previously stated, the narrative is mostly just an accessory to making Delsin a stronger, more hardcore Conduit.  If you don’t do any sidequests or clear out much of Seattle, then you could probably plow through this game in seven or eight hours.  However, those things are usually needed in order to gain further upgrades, thus doubling that time for many players.  Thankfully, you don’t get bored very easily, and the side quests can be rather enjoyable.  The sheer exploration factor is enough to keep you occupied for at least a couple of hours.

Character development is tricky in this game, because not only do you have to consider Delsin’s Karma and whether he’s a good guy or a bad guy, but his influence on other Conduits also changes based on specific Karmic decisions, thus determining how he develops. Long story short, there isn’t much development at all.  Delsin grows a little bit outside of the Karma, but it’s mostly a long hallway of him being curious, asking questions, growing stronger, and taking revenge, without much transformation at all by the end of the game.  Though there is some, to his credit.  He’s also surprisingly kind-hearted in general, which I hadn’t expected going into the game.

At the risk of sounding unprofessional… Seattle is a BLAST, man! The setting is easily one of the best parts of the game.  I don’t know how accurate it is to the actual city, but after over a dozen hours of exploring the various zones, marveling over the architecture and inspirational design, and figuring out how everything is laid out, I’d say that it’s probably a pretty strong representation of the real place.  Not to mention that the integration of the setting into how Delsin uses and refuels his powers is fantastic.  Then there’s your dozens of prompts to paint graffiti all over the city, which always turn into products that frequently surprised me with their creativity.  I loved the setting perhaps more than anything else.  Except for maybe the powers themselves.  It’s a toss-up.

What the game lacks in a quality story, it at least compensates for in quality delivery of that story. The dialogue is engaging, strong, and oftentimes forces a laugh out of you.  The bickering brothers between brothers Delsin and Reggie is enough to make you smile, and there’s no shortage of intentionally half-baked one-liners from the super-hero to-be.  The dialogue is clean, clear, and transitions from one narrative event to another in almost perfect harmony.  The voice actors also capture their characters with impressive accuracy.

I:SS is an open-world, action-adventure game with emphasis on character mobility and destructible environments. Each of the four skill trees grants Delsin a completely unique way in which to traverse around Seattle, while using basic elements of parkour to compliment them.  Take “Smoke” for example.  This is the first ability Delsin acquires, and in order to get around, he dematerializes into a cloud of embers and smoke to travel through vents and creates for himself a sort of smoke-cannon whenever he stands on top of vehicles.

The game is smooth with a solid frame rate and no noteworthy issues in camera control. Everything about the general control scheme and actual maneuverability of the character in the game world seems very polished, with only a few minor upsets when he doesn’t grab the ledge you want.  Nothing too damaging to the final impression.

Some of the powers will have overlapping functions, but even those are made to be as different as possible. For example, every skill tree has a weak ranged attack that can be fired in rapid succession.  However, there’s deviation between these, as one shoots in shorter, harder bursts, another shoots a constant stream, and another acts as a sniper-rifle.  This aside, each of the skill trees could function almost entirely on their own as the only skill set in the game, with enough variety in and out of combat to make you feel more than formidable. 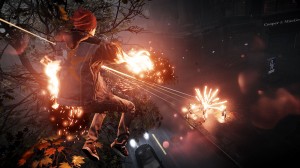 Delsin raining fire down on a group of D.U.P. soldiers.

There is no multiplayer function in this game, and all the better for it. The only way I could see them getting away with multiplayer is if they replicated something similar to Assassin’s Creed: Brotherhood.

Graphics are fantastic, especially for a game created at the console’s release.  The colors of the city combined with the colors of Delsin’s explosive abilities make for a very debris-filled and wonderful landscape.  The character models are solid, with good voice acting and lip-sync, and, as I mentioned above, Seattle is drop-dead gorgeous in nearly every way.

The audio is great too.  In particular, I’d like to draw attention to Delsin’s “super attacks.”  The “Orbital Drop” ability has a very powerful withdrawal of noise at the moment of impact, which makes the consequential mayhem sound all the more intense when everything kicks back in.  That being said, there’s nothing really wrong with any of the audio clips, and there was nothing that distracted me or peeved me during the gameplay.

The music however, is a different story.  I’m trying to remember if there even was music.  I mean, there must have been, and I must not have disliked it or I would have remembered.  But since I don’t remember, then that means it likely wasn’t anything noteworthy or spectacular, and the musical score can thus be classified as altogether unmentionable.

I:SS drops several bits of profanity throughout its course, but is never bursting at the seams with it. I do not recall any F-bombs either, which might suggest the developers wanted a game at least relatively clear of swearing.

No blood or anything, but plenty of violence. Because of the Karma system, the character is presented with entire skill sets that can be executed either to detain enemies or destroy them.  This is to say, while everyone’s game is going to involve some super-powered combat, it’s really up to the player exactly how vicious they want to be towards their enemies.  And yes, some of the deaths can be pretty brutal, even if they’re free of blood.  One kill move in particular involves clasping a man’s helmet between both hands and heating up the contents to basically cook him alive.  Or you can wrap him in tangible smoke and leave him immobile (the good option).  Just a few things to be aware of.

There are a couple passing comments that humorously allude to sex, but otherwise the game is clean of any actions or dialogue that pertain to this material.

There’s not much to speak of on a strictly spiritual level, with the exception of the Karma system (a concept largely related to Hinduism and Buddhism). The character, Fetch, does create a pretty extravagant altar to another character (ambiguity for sake of spoiler safety), but it’s done so more out of remembrance’s sake than worship… even if it doesn’t seem that way at first.  Also, Delsin wears typical delinquent garb and has at least one jacket sporting an ensemble of skulls/skeletons/the like.

There are side-missions that involve drug busts, and you as the player are encouraged to break up these meetings and terminate the substances being peddled. There’s also the character, Fetch, who has an entire history of being a drug addict and has made it her life goal to exterminate any individuals that traffic drugs.  This is what she is found doing when Delsin intervenes.  Whether or not she continues this course of action depends on the player.

All in all, the game delivers on the tease of its slogan, “enjoy your power.”  I enjoyed it quite a bit, even if it won’t be winning any personal awards.  The city is beaming with life and energy, the powers are absolutely delicious, and the story, while largely unfulfilling, is refreshingly straightforward and unafraid to make you laugh in serious situations.  All of this is coming from a guy who found a five-minute rundown of the first two Infamous games and decided they were unnecessary to enjoying this one.

God bless, turn up the heat, and always remember to smile.

VERSE OF THE DAY – John 9: 1-5
As he went along, he saw a man blind from birth. 2 His disciples asked him, “Rabbi, who sinned, this man or his parents, that he was born blind?” 3 “Neither this man nor his parents sinned,” said Jesus, “but this happened so that the works of God might be displayed in him. 4 As long as it is day, we must do the works of him who sent me. Night is coming, when no one can work. 5 While I am in the world, I am the light of the world.”

A tour de force through Seattle with one agenda in mind: make you feel as much like a superhero as possible... with some laughs for good measure.