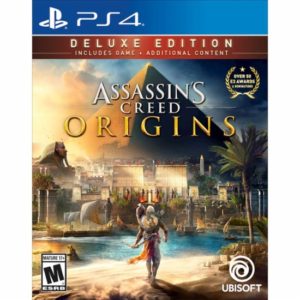 In the Bible, you may know that Egyptians worshiped many gods. In this game, you will be able to see temples of various Egyptian gods, people’s worship, high priests and seers’ activities, including a festival for the gods. You will also encounter similar religious dedication from the Roman Empire.

Origins allows you to disable the blood, which I am grateful for, but the intensity of violence is definitely higher than previous Assassin’s Creed games.

It is totally unnecessary to make ancient Egyptians curse with modern words, but that is what you will find often in their in-game dialogues. I will expand on this in my conclusion.

Origins has a lot of mature content of sexual nature, such as topless prostitutes, a queen with revealing clothing, and suggestive dialogue. There is also an intimate cinematic between main characters Aya and Bayek.

Side quests are more positive in general, such as playing with children or; helping the sick and the weak. The game does encourage players to be creative and strategic with customization of gear, abilities, and mission resolution.

Origins has drawn a lot attention from the public before its release, and expectations are high. During the playthrough, I definitely experienced some ups and downs. I even have some concerns for the franchise’s direction moving forward. Eventually, fans will have to decide themselves whether the franchise is worthy to follow or not. 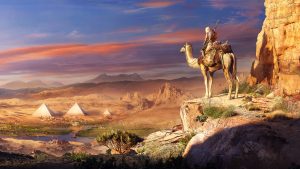 Without a doubt, it is a delight to explore the beautiful open world of ancient Egypt as main characters of Bayek and Aya. You can ride by camel, horse, oxen cart and chariot. You can navigate Egyptian and Roman boats. You can hunt lions, hippos, crocodiles, and hyena. You can climb almost every building, rock and structure. I never get tired of running around, because it is amazing to emerge myself into a living ancient world populated with people and a robust animal kingdom.. 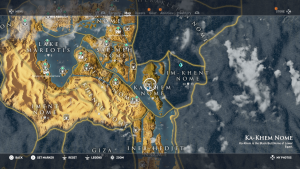 Origins is a heavy XP-based game, and everything desire to do will provide XP. The whole map is marked and separated by levels. View points are not required to unlock the map, but they are still a great way to fast travel. Main story quests have level requirements, so you may have to take on some side missions to level up before you move on to the next plot point. There are three directions for abilities: hunter, warrior and seer. The hunter focuses on bow and arrow; the warrior is all about strength and close combat; the seer is an expert at using tools such as darts and bombs as well as merchandise from markets.

In order to increase your health and the number of your tools, you have to collect enough raw materials for crafting. Hunting, making purchases from vendors, and looting can help you with accumulating materials. Gear and weapons are easy to find when you complete quests and loot everywhere. There is even a special child vendor in the game who will provide one special quest for you per day with a guaranteed rare or legendary weapon once you complete it. The game also has easy, normal and hard difficulty levels to choose any time, so you don’t have to worry being overwhelmed at all.

Origins‘ combat system reminds me of that in The Legend of Zelda: Breath of the Wild. You can set traps, shoot a fire arrow at the flammable jars next to enemies, and even set free some captive wild animals for distraction. The choice for solutions are yours.

Even though there is more than one way to solve these situations, I would still prefer stealth over face-to-face combat. You will have a wide range of weapons to choose from: hunting bow, light bow, warrior bow, predator bow, regular sword, sickle sword, heavy blunts, heavy blades, and spear. You have different tools to assist your play styles as well: sleep dart, fire bomb, poison dart, smoke screen. You can swim, dive, hide dead bodies, or turn lower level enemies against their allies, and even tame some wild animals to follow you in the journey. 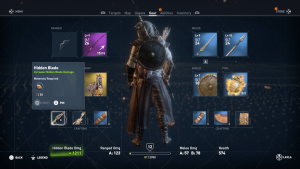 To know the advantages and flaws of your weapons, you can choose them based on your own preferences and styles, and use them wisely in all battle situations. Captains and commanders are usually high level enemies at various locations and missions, so strategic stealth is a better way to engage. Play smart; for you are not designed to be strong enough in a battle of 10+ enemies. Additionally, be wary and be careful of this new foe Phylakes, for they can kill you by one hit. The game will warn you if they are nearby, and you can see them on the map by their red evil mark, it is your choice to hide or to die. 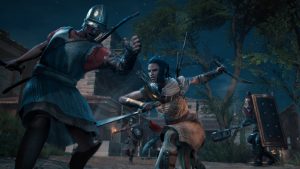 Generally speaking, climbing is more smooth, finding view points is less of an obligation, fighting is more engaging, and exploring is more enjoyable. However, the game still suffers from the clunky camera angles, especially during combat. I recommend that you lock on to your enemy every time just in case the camera throws you everywhere you don’t want it to be, at least you would do some damage to your intended target no matter what. Frame dropping is another annoying issue, and hopefully it will get better with future patches.

I found side quests more fun and memorable than main story. Playing hide and seek with children, looking for the lost treasure, helping the injured and protecting the weak are definitely more interesting than just merely assassinating whoever in the story line. It is great that Ubisoft wants to dig into the origins of the brotherhood story, but unfortunately main quests just feel like filler—killing whoever like chess pieces on the board. It’s repetitive and perfunctory, lacking in meaningful consequences. 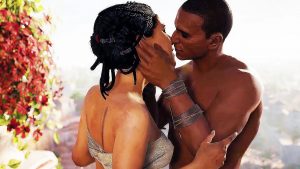 By the way, being driven by revenge and pledging oneself to violence are definitely NOT the solutions for bringing peace. Revenge being the motivating factor for Aya and Bayek’s acts of violence disappoints me, as I found this weak storytelling and character building. It is a wrong message to deliver to gamers and to the world. Queen Cleopatra is shown as a woman who merely uses her beauty to subdue men for power; while in history she may have been beautiful, she also conquered and ruled with her charisma and intelligence. Even with the understanding of being in a fictional game setting, I still could not stop feeling disappointed and sad for their lack of research, depth and reflection on such an important historical figure. Origins fails to build a meaningful cause for the brotherhood, fails to deliver the positive message of peace and better world, and fails to give justice to a major historical woman without Hollywood stereotypes and sexualized images. 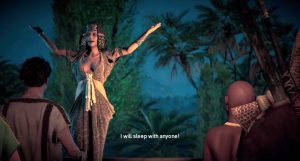 Please don’t forget that Origins is labeled as “mature 17+” instead of “teen” like all the previous games. You may wonder why they put “mature” this time, and yes, they have reasons. If you have young children, early teenagers, I would not recommend it for you because of its mature content. For example, there are topless prostitutes found at some brothels, the queen Cleopatra usually wears revealing clothing engages in suggestive behavior, and main characters Aya and Bayek engage in some intimate moments that you can easily tell they are having sexual relations. The intensity of the violence is increased even when the blood is disabled in option menu. The “s” word occurs quite often in both ancient Egyptian and modern world dialogues.

This is the trend that I worry about for Assassin’s Creed franchise, and whether it will continue going down to more suggestive themes, more intense violence and stronger language. If yes, then some Christian gamers may have to draw a line and to say good-bye to this beloved series.

Assassin's Creed: Origins is a game whose content concerns raise the question as to whether or not enduring is language, violence, and nudity is worth the improved graphics and gameplay.