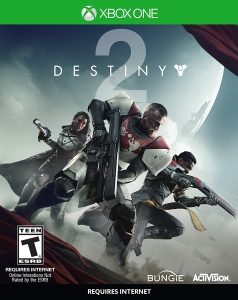 Though the original Destiny was well-beloved by fans, it’s no secret the game had problems. Now, three years after its original release, Bungie has dropped the follow-up to what they promised would be a ten year franchise. Have they listened to feedback or is Destiny 2 doomed to repeat the mistakes of its predecessor? 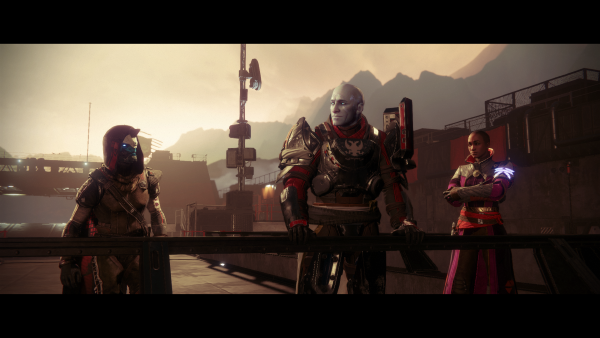 Just as in the original Destiny, the Traveler is a being that showed up, bringing light to the guardians (and, consequently, the ability to resurrect time and time again). Now, the Cabal army has seized the Traveler and is having internal struggles between stealing the light and trying to become beings worthy of it. Players are the only guardians with the light and, as such, saving the galaxy falls on our shoulders.

The game is full of gun shots, stabs, explosions, and more, but there is no blood or viscera to be concerned about.

Teamwork makes the dream work! Work together with other guardians to defeat the Cabal and save our solar system from certain doom! 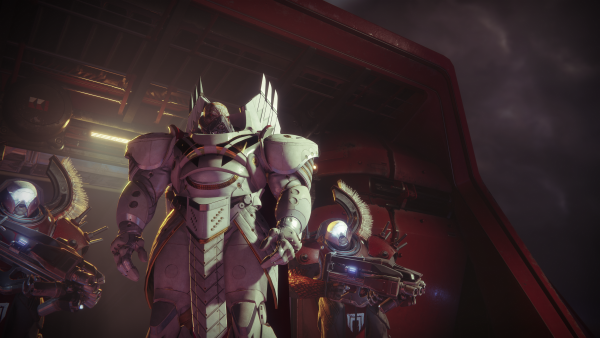 Unless you’ve been hiding under a rock for the past few years, you’re probably familiar with Destiny in some capacity. Despite several missteps, fans poured hundreds of hours (1500+ myself) into the original. What Bungie lacked in breadth, they made up for with excellent feel. With the sequel in our hands, I’m comfortable saying fans are getting more of what we wanted with some quality of improvements, but I don’t see Destiny 2 winning many new folks over.

The most notable change with Destiny 2 is in its narrative and storytelling mechanics. While the original had some interaction through comm chatter and hidden cards, the sequel does a much better job of putting the major players on screen, integrated into the missions at your side. The result is a more immersive storytelling mechanic that breathed some fresh air into this Guardian’s lungs. After the primary tale is done, Bungie has more narrative-driven content waiting in the wings to keep players engaged in the world.

The story is a dozen-hour or so romp around a series of new locations. Earth is still a major location, but Instead of traditional planets like Mars and Venus, we get to travel to some less familiar heavenly bodies. The massive ocean waves of Saturn’s moon, Titan, the colorful cliffs of Jupiter’s moon, Io, and the Vex planet of Nessus with its white rivers are all breathtaking. 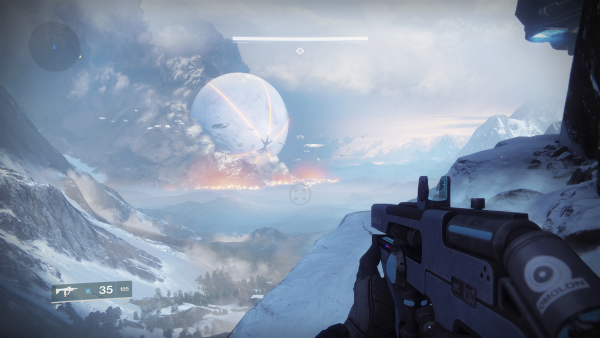 The Cabal enslave The Traveler

The biggest reason to come to Destiny 2 is going to be the gameplay. To be frank, this is still the same engine that drove the first game, but that isn’t necessarily a bad thing. Despite some other design flaws, the movement and gunplay mechanics were good enough to keep me engaged for over 1,500 hours with the original. That excellence in control and feel is still here with Destiny 2. If you weren’t a fan of how the original felt, however, you should probably stay clear of the follow-up.

One of the most notable changes to the core gameplay is in weapon type. In the original, you just had a primary, secondary, and heavy weapon. Now, you have a kinetic, energy, and power weapon instead. Kinetic is primary for dishing out damage to unshielded enemies while the energy and power weapons can offer a bonus type of damage (or in the case of Nightfall strikes, an extra wrench in the cogs). The typical cadence of combat will have you focusing on your kinetic weaponry, switching to energy for heavier enemy types so you can drain their shields. It’s a setup I was initially skeptical of but, in practice, I’ve grown fond of. Energy weapons are perfectly viable in PvP as well. 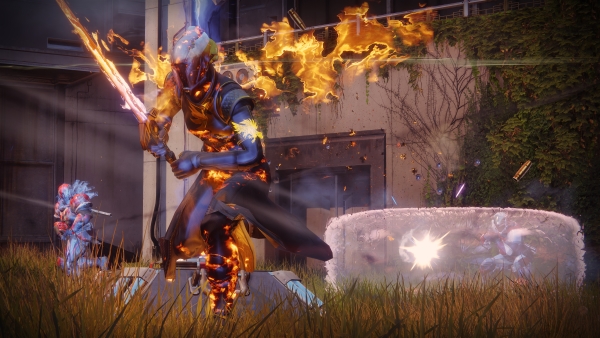 New to Destiny 2 is the Director, a system that lets you queue up quick-travel to a new place without having to sit in orbit for minutes at a time. Whether you’re going from planet to planet or quick-traveling to another zone, it makes the transition much smoother than before. Long-time Destiny fans will also appreciate the world event timers, which show when something is happening and how long until it commences.

After the story, the strikes and patrols will be the primary PvE attractions to hold your attention. Much like the first game, you can earn faction rep for encoded engrams. Here, though, instead of a persistent level with a handful of factions, each planet has a caretaker that doles out the rewards. As you roam around locales, you can get world-specific coins from chests or for completing challenges and world events. Giving those to planet’s caretaker will earn you some rep, eventually resulting in an encoded engram that could hold some sweet new gear. The weekly Nightfall strikes are back, too, with some even more devious mechanics than the original game had. Running timers replenished by killing foes, constantly switching elemental affinities, and more promise to deliver all the challenge and triumph the fireteams of yesterday had grown to love.

Instead of a handful of daily bounties, Destiny 2 has challenges. Every world and game mode gets a fresh set of challenges each day. Completing them will result in XP, faction rep, and the like. For example, you could earn Vanguard rep for completing a couple of strike-related challenges then play a few rounds of PvP to earn some Crucible coins. It’s ultimately still a huge loot hamster wheel, but it keeps things fresher than Destiny did, ultimately offering more to complete day-to-day. 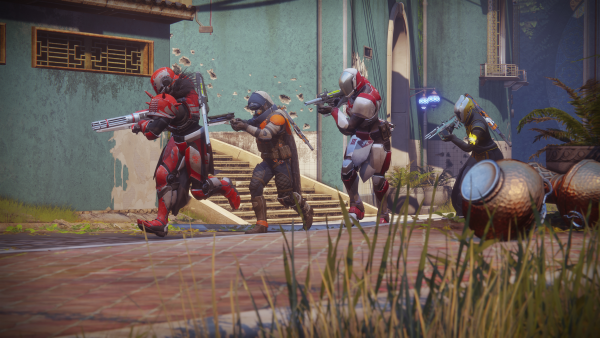 PvP is trimmed to 4v4 now

Much to my chagrin, the Crucible multiplayer in Destiny 2 has changed from 6v6 to 4v4. From a social aspect, that cuts out up to two more people per fireteam. I have to eat some crow, though. I complained during the beta of the smaller teams and how much strain that would cause in social groups. Bungie genuinely knew what they were doing though. The competitive modes are finely tuned, offering an intense experience that requires everyone to communicate for victory. While I would still love to see a casual 6v6 mode to play with larger groups, I have to admit the 4v4 modes they’ve delivered offer an excellent PvP experience that’ll have guardians coming back for years.

New to Destiny 2 is the inclusion of clans. Geeks Under Grace even has one. Everyone in the clan can contribute up to 5000 points a week  (it took 100,000 to collectively reach Level 2) and, as clans progress and complete milestones, all clan members reap rewards. It’s a fun, more social experience that helps players feel like they’re part of something larger than the whole. For those less engaged, it can at least offer them some bonus perks. I’m looking forward to seeing how Bungie expands this in the future, too. 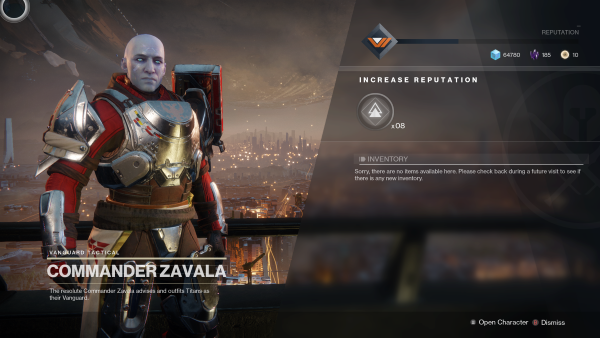 While Destiny 2 is no slouch, I feel like the visuals don’t really offer much in terms of innovation. The new locales offer some welcome variety, but much of Destiny 2‘s content will be familiar to seasoned veterans. Everything you’ll see in here was probably in the original. With a few exceptions and tweaks, enemy designs feel pulled from the first game. Several exotic-tier weapons and armor are even brought directly over. The menus are largely the same as well, but there are some visual flares (like the NPC interactions) that add a bit of flavor. That said, the game still looks and feels slick at a consistent 30 frames per second.

In my opinion, the feather in Destiny 2‘s cap is its soundtrack. There are some great tracks that offer gripping, emotionally evocative accompaniment to the on-screen action. At the time of this writing, it’s available on Bungie’s official store for $10 and I have no issue recommending it. The game’s voice cast is fantastic as well, bringing in the talents of Nathan Fillion (Cayde-6), Gina Torres (Ikora Rey), Nolan North (Ghost), and my personal favorite, Lance Reddick as Commander Zavala. There’s a lot of other major talent tucked away as well. Aurally, Destiny 2 is a treat. 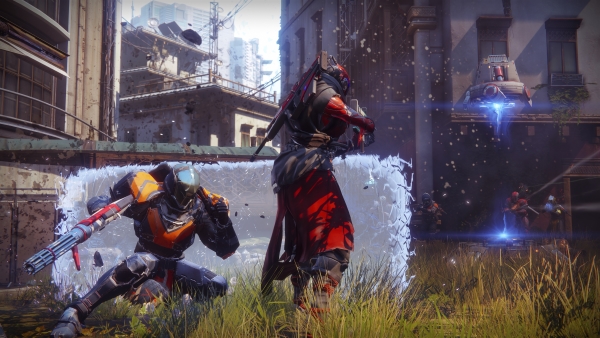 At the end of the day, Destiny 2 is a fun, engaging first-person shooter that improves over the original in nearly every possible way while keeping what fans found so engaging intact. Better storytelling and fantastic sound design accentuate top-tier shooting and movement mechanics. While much of the end-game content is still going to be somewhat of a treadmill, there’s still a lot here to love. With the promise of in-game events and more expansion content, fans will be happy for quite some time.

Bungie's latest entry in the series makes some considerable quality of life improvements for fans while improving their storytelling. Awkward group counts and an unchanged core won't likely win over many converts, however.