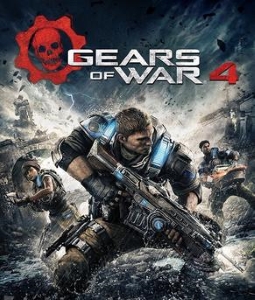 The Gears of War franchise has had my heart for nearly a decade. When I heard they were working on a new entry in the series and bringing in some fresh blood for the story, I was beside myself. Now, we have the latest action-packed lancer-ripping game in our hands and the result is even better than I had hoped. A new generation of Gears has arrived, and it’s been masterfully machined! 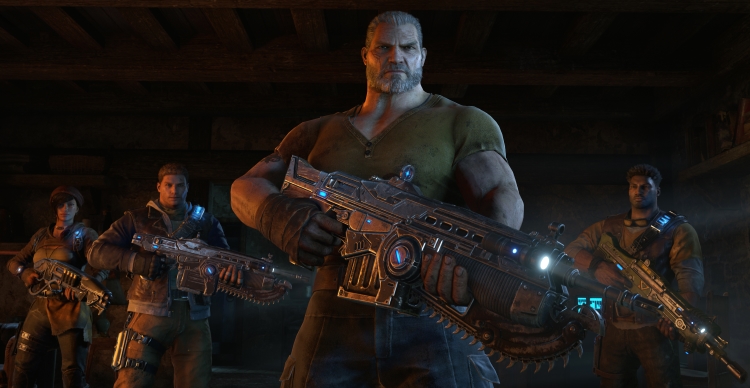 Retirement has been good to Marcus

Some of the thematic elements of Gears of War 4 are actually fairly heavy. Characters deal with loss, abandonment, hopelessness, and the memories of things they’ve done or should’ve done throughout their lives. The game tries to pace this out with comedic relief and is relatively successful, but there are certainly some heavier emotional moments and themes within the game. Coincidentally, no mention of a power any higher than the government is ever approached, though some things point to humanity’s belligerence as the cause for Sera’s severe environmental hazards.

Without a doubt, Gears of War is one of the most violent, gory franchises on the market. That is no different this time around, with a few new tools for destruction actually offering new gruesome ways to slaughter your foes. The game heavily features and glorifies gore and viscera, explosions, decapitations, and more. Bear in mind the trademark of the franchise is a machine gun with a chainsaw on it, so exercise caution should younger audiences bear witness. 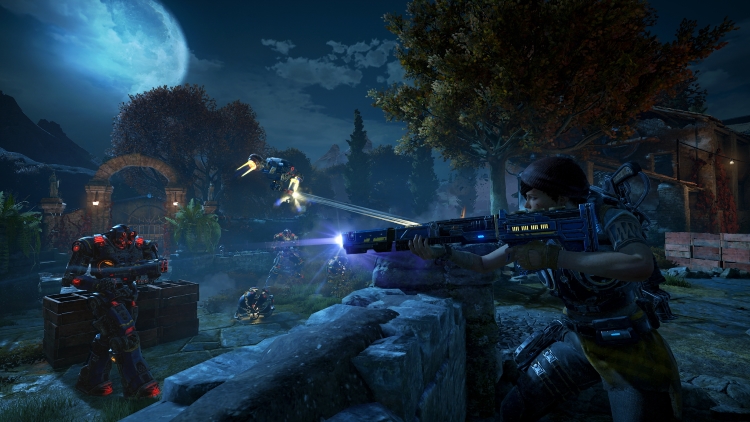 Crude humor is relatively muted in the game. There are plenty of comedic jabs, but little of it ever crossed the barrier of feeling crass. That said, the game’s language is definitely a concern. The game’s narrative uses everything from S*** to G**D*** and F***.

The sexual content in the game is virtually nonexistent. There are some minor allusions to JD and Kait having a potential romantic interest, but it never goes any further than that and nothing illicit is ever shown.

Gears of War 4 is a reminder to everyone that teamwork and camaraderie are paramount throughout life. I believe the church was given to us much for this same reason, so we can edify and lift one another up (1 Thessalonians 5:11). 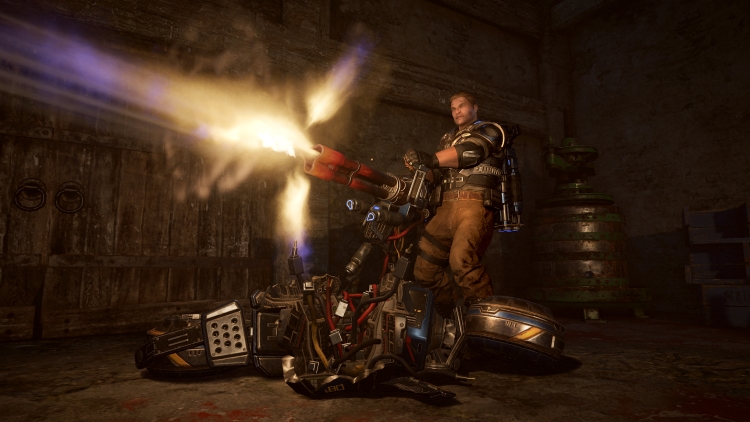 Fans of the Gears franchise have been patient. With the end of the original trilogy, we knew Sera offered more stories to tell, but what? Judgment offered a fresh storytelling approach, but a side-story was never meant to satiate fans for long. Now, the team at Coalition have buckled down and delivered, in my opinion, one of the best games the franchise has seen to date.

Let’s get your concerns out of the way. Everything you want from a Gears game is here: a fantastic campaign with engaging narrative and characters, a rich competitive suite to keep the rabid fanbase happy, and a completely revamped Horde mode. On top of that, they’ve nailed the gameplay while providing a ton of new content for fans both new and old to enjoy. 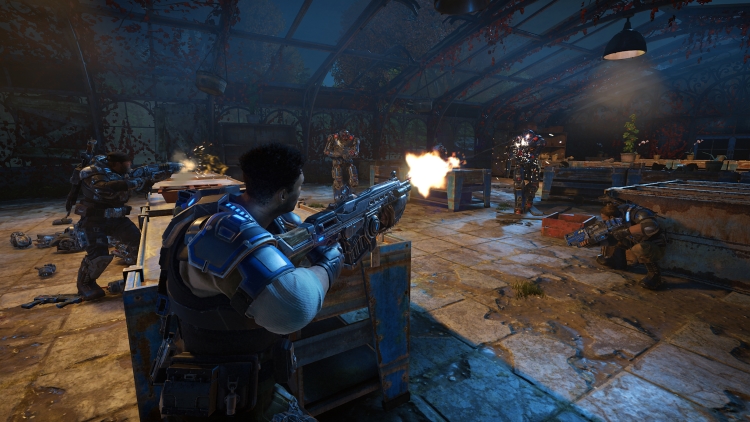 As far as the core gameplay experience is concerned, fans will immediately feel at home with how the guns and inventory handle, but Coalition has seen fit to add a couple great new mechanics to the mix as well. We’re all familiar with Gears’  waist-high walls, right? Well, JD and company can do more than just take cover behind them now. Roadie running and don’t want to stop? Just vault over them and never break stride! Got a pesky enemy on the other side of one? Reach across and drag him out of hiding! Both feel fantastic and have the potential to really shake up the competitive scene a bit. I have a minor issue with the removal of COG omens for collectibles, but in the grand scheme of things, it’s a minor quibble.

While we’ve briefly mentioned the new guns, let’s dive more into the expanded armory. The mainstays are all here: lancer, gnasher shotgun, boltok pistol, torque bow, etc. Variety is the spice of life, however, and Coalition have added a variety of fun new firearms to play with. If you like mid range, the new SMG can dole out damage in bursts. For heavy close-range damage, there’s a two-blast shotgun called the Overkill that’s a personal favorite of mine. Snipers can try out the Embar, a rifle that releases an amped charge of electricity. For your more intense form of destruction, we get the Dropshot, a cannon that fires flying remote explosive drills (RIGHT!?), and the Buzzkill, a heavy weapon that launches saw blades (but heads up—they ricochet!). All in all, the new gear adds some fantastic variety to an already filled-out cast and gives you plenty of new toys to experiment with. They’re literally a blast!

What about my primary reason for engaging with Gears: the story? Even after the fall of the locust, the world of Sera is an unforgiving place. Horrible natural disasters ravage the landscape and the COG have declared martial law, driving those with different beliefs to fend for themselves. After some creatures raid  an “Outsider” settlement and capture its leader, Reyna, her daughter Kait (Laura Bailey), and COG deserters J.D. and Del take up arms to get her back and uncover the origins of the raiders. What we end up getting is a wild, explosive story full of jaw-dropping set pieces, interpersonal interaction, and intrigue. The game has its fair share of edge-of-your-seat moments, of course, but the tale’s excellent pacing and comedic relief do a great job offering a reprieve from the tension. There are some fantastic nods for longtime fans as well. Start to finish, Gears of War 4 delivers a fun, engaging experience fans will remember for years. 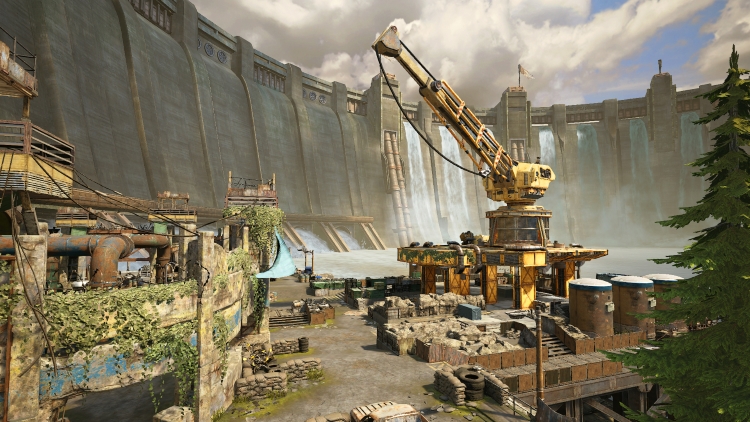 Players that look beyond the story for their entertainment will have plenty to keep them busy here as well. The game is launching with 10 maps to use in both Versus and Horde modes (with another 24 in the first year!). Versus mode has eight modes to ensure folks get plenty of variety if Deathmatch grows boring or frustrating. Horde 3.0 lets players choose where they want to set their base and construct emplacements—both by way of a “Fabricator” that uses energy from downed enemies as fuel.  Horde also lets players choose a class and build it out to suit their playstyle. It’s a blast with a few friends is good at shaking things up. On top of just playing the game, players can customize their gear and get bounties for booster packs. Yes, there’s a store to buy multiplayer packs in-game, but it only uses in-game currency, so folks have no need to cry money-grubbing foul. 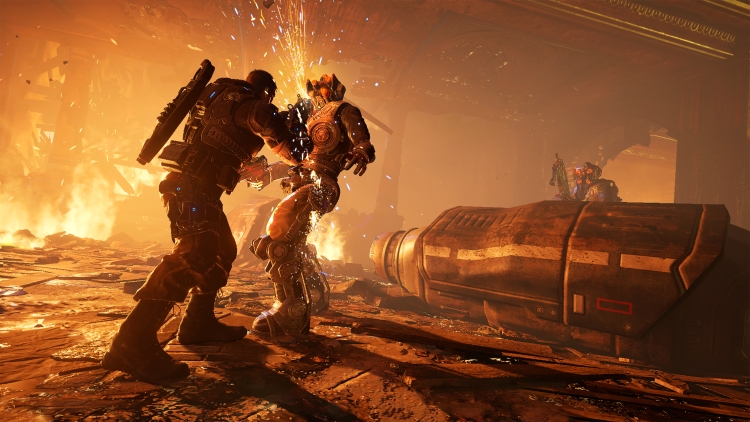 Aesthetically, Gears of War 4 is for the eyes and ears what a well prepared steak and baked potato are for the dietary senses. The game looks incredible, with richly detailed environments and character models. Lighting and stage design do an excellent job bringing each location to life. In-engine cutscenes look gorgeous, both environmentally and on a per-character basis. With phenomenal voice acting and an emotional, driving soundtrack, the sound design shines as well. John Dimaggio reprises his role as the grizzled Marcus Fenix while Laura Bailey delivers and excellent Kait. Excellent casting has given us Eugene Byrd (Del) and and video game rookie Liam McIntyre, who feel right at home with a lancer in their (digital) hands.

While we’re discussing the aesthetics, I should mention the discrepancies from Xbox One to PC. I think it’s wonderful that Microsoft is moving in a cross-platform direction. The cloud saving works without a hitch and the ability for PC and Xbox gamers to play together is going to be a marvelous boon moving forward. There are issues with each platform, though. The PC lets folks with the power to do so uncap the frame rate, change the resolution, and so on. The game looks unreal (*snicker*) with more significant hardware behind it. In my experience, though, the PC version had some severe hiccups during cutscenes, often hitching and garbling voice lines together or altogether locking up. While it was otherwise perfectly fine, it was bone-jarring to see the console version locked at 30 frames/second after seeing my PC pour out 60 frames/second. 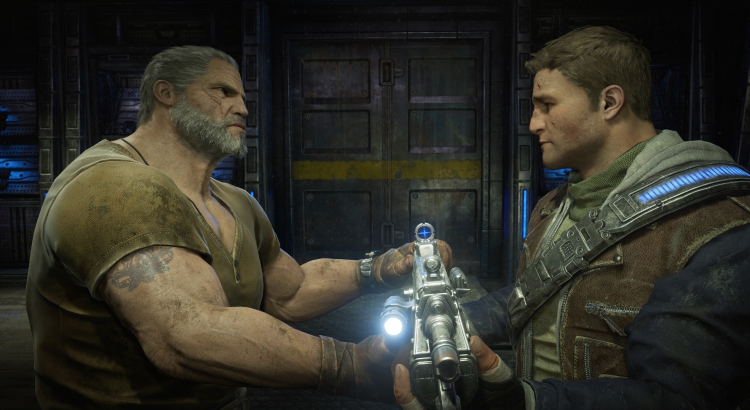 At the end of the day, Gears of War 4 turned out to be an even better Gears game than I hoped. The Coalition has developed an excellent title worth of the Gears mantle. Whether on PC or Xbox One, the game looks incredible and the sound design accentuates every moment of the gameplay. On top of all that, the game delivers an excellent narrative with likable characters, a slew of new weapons and enemies, a decked out Versus mode, and a fun revamped Horde mode. There’s more content here than you can shake a lancer at.

Kidding aside, Gears of War 4 is a phenomenal game from every aspect and anyone with an Xbox (or PC) and penchant for shooting stuff should pick up. Just be mindful of younger audiences consuming its graphic content.

Gears of War 4 is a return to form for the beloved franchise. It takes everything the series has done so well over the years and adds plenty to keep things fresh without bogging down the ride. An excellent campaign, revamped Horde mode, and more world-class competitive content than you can shake a stick at ensure gamers everywhere will be enjoying JD and his friends for years to come.