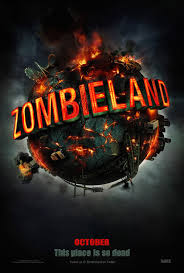 Following the unforgettable events of September 11, 2001, zombie-centered films surged in popularity. Scholars have speculated that their rise to cinematic prominence during the decade that followed represented a shift in Western consciousness. Namely, a fear of the cultural “Other” stemming from the growing anxiety around terrorism.

Whatever the reason, zombies dominated the cultural conversation for large parts of the next decade, and it wasn’t long before this popularity began spawning spoofs of the traditional zombie-movie model, the most notable probably being 2004’s Shaun of the Dead. With the public’s appetite thus whetted for the niche genre of zombie comedy, along came Zombieland, which garnered a great deal of praise from casual zombie fans.

There isn’t much in the way of a story. Four characters band together and travel the country in search of a place that’s rumored to be free of zombies. Along the way, a voice-over from the geek protagonist referred to only as Columbus regales the viewer with the set of rules he’s created for how to not get killed by the ravenous flesh-eaters that now populate America. Really, the film as a whole is little more than an excuse for the characters to repeatedly bash zombies’ heads in, and it does this as well as it possibly can.

Violence: Zombies kill humans and feast messily on their innards. Zombies are killed in creatively gruesome ways, which include guns, hedge clippers, and baseball bats. Blood splatters on the camera at points. There is lots and lots of gore.

Language: Assorted profanity, including liberal use of the F-word.

Alcohol/Drug Use: Characters smoke marijuana in one scene.

Sexual Content: Characters discuss and make references to sex that vary in crudeness. There’s a fairly intimate almost-kiss and one actual kiss.

Other Negative Content: Much of the film’s humor is quite dark and treats death very casually. Two characters start out as con artists. Violence is glorified, though it’s specifically violence against zombies.

Just as main character Columbus has his own list of rules for fighting zombies, Zombieland seems to have a list of rules for writing about them, with the first being “Everything in Moderation.” There are encounters with zombies, but they never drag on. There’s emotion, but we aren’t marinated in melodrama. There are definite character archetypes, but nobody gets stereotyped to heaven and back. And probably the most refreshing thing is that the characters are actually intelligent. We’re mercifully spared from the forced jump-scares and avoidable tragedies that plague other zombie slaughter fests. Zombieland has a simple take on this that it uses to dark comedic effect: all of the stupid people are already dead.

The street-savvy swashbucklers in question include Columbus, the geeky but scrappy protagonist, and Tallahassee, a tough guy whose main interests are slaying the undead and hunting down the world’s increasingly scarce supply of Twinkies. They band together with a pair of wily sisters who con them–twice –and embark on an adventure that’s less a horror flick than it is an almost-romantic-comedy-road trip film with mindless flesh-eating corpses sprinkled around the edges. 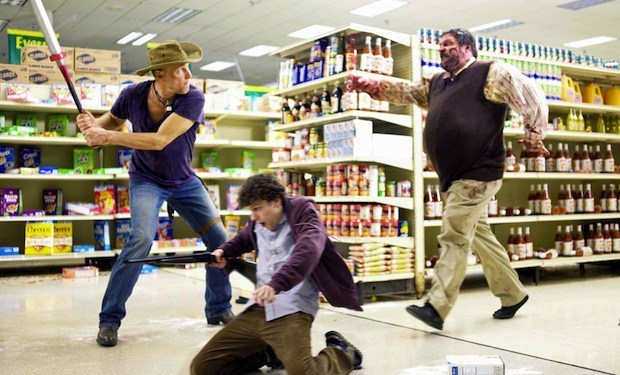 Which is fine, because Zombieland isn’t meant to be an actual zombie movie, anyway. Not really. It’s not about hordes of undead or grim survival like it’s more traditional counterparts in the subgenre. Zombieland, rather, is a movie about zombie movies. It expects the audience to be familiar with the standard tropes and lets its characters loose to subtly critique them through their actions and varying philosophies.

The “rules” that occasionally pop up on the screen–that are used with brilliant comedic timing–are the main example of this critique, as they’re essentially descriptions of how to avoid the common ways in which people end up as dinner chow for the undead. See, the heroes have more or less figured out how to deal with their post-apocalyptic reality. So with the zombies pretty much neutralized as actual threats, they’re free to put their passions toward their more mundane goals, and the resulting humor flows naturally along with the plot. There are no forced jokes here: many moments are ridiculous, but a legitimately funny and believable kind of ridiculous.

Fans of the zombie genre will likely find this outing to be quite tame. As I mentioned, zombies are for the most part reduced to a punchline rather than a threat. And while the death-ravaged cities and countryside through which the characters travel is as bleak as you’d expect, no existential dread is ever allowed to set in thanks to their casual attitude about it all combined with the upbeat soundtrack. If you’re looking for a hardcore zombie fighting escapade, this one probably isn’t going to tickle your peach. But in the sub-subgenre of zombie comedy, Zombieland has established itself as a top entry right alongside fan favorite Shaun of the Dead, and has cemented itself a place in the canon of zombie lore.

I’d like to finish here by highlighting my personal favorite part of the movie. The “Zombie Kill of the Week” sequence is hysterical in every way, and should there ever be a zombie apocalypse, I’ll be earnestly awaiting a compilation of these.