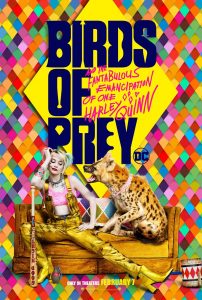 Margot Robbie is back in her role as Harley Quinn! Now she must team up with a group of female anti-heroes to stop an evil crime lord from taking over Gotham City and killing her in the process. For all its efforts though, can this passion project improve upon the DCEU’s previous poor efforts with films like Suicide Squad?

Language/Crude Humor: Severe language throughout including multiple instances of f***

Sexual Content: Some scantily clad women. A character is stripped of her dress down to a bra.

I’ve been pretty inclined to supporting Birds of Prey since it was announced. The project was born out of an immense passion on the part of actress Margot Robbie after her performance as Harley Quinn in Suicide Squad. That movie failed her character and largely dropped a potential story arc about Harley Quinn coming to terms with the abusive nature of her relationship with the Joker. Regardless, Robbie adored the role and fell in love with comic books in the process of shooting the film. She even went as far as to commission the script of Birds of Prey prior to it being announced so she could pitch it to Warner Brothers. The movie’s subtitle, the Fantabulous Emancipation of One Harley Quinn, even suggested that Robbie was interested in exploring her character further and advancing her story arc into a place of self-actualization.

Who is Harley Quinn without the Joker?

That’s a great place to take an interesting character whose identity has always been wrapped up in another figure. Tying that story in with Birds of Prey additionally gave DC the chance to resurrect a fan-favorite team of female superheroes. Given the immense success of Wonder Woman in 2017, it’s no surprise this film was fast tracked. 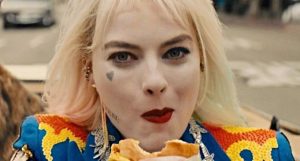 If nothing else, I respect the concept. If Margot Robbie walked away from this happy that she finally got the film she deserved for her character, then I’m happy for her.

Sadly I’m not terribly enthused by the final product. Birds of Prey isn’t the worst thing to come out of the DCEU staple since its introduction in 2013, but it’s emblematic of everything that Warner Brothers habitually gets wrong in its superhero movies. It wants to be an avante-garde, ultra-stylized blockbuster but it lacks the solid foundation required to bounce off its ideas concerning its characters. Mind you, it’s full of ideas. This film actually features a pretty decent core that takes it a notch above some of the worst DC films.

Birds of Prey wants to be a breakup comedy.

That’s actually kind of a novel concept in regards to superhero action/comedy standards. Cathy Yan’s direction seems to use that basic setup as a jumping off point for a story about girl power and identity. As this is technically a low stakes team-up film with five female heroes/anti-heroes, it finds unique angles for each of its characters and tries to tie them all together with a basic theme: how does a person rebuild their identity in the aftermath of tragedy? 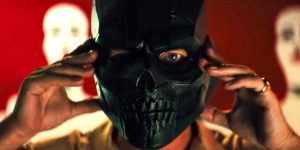 The film is set an indeterminate amount of time after the prison escape at the end of Suicide Squad. From the outset of the story, we’re told that Joker and Harley Quinn had a falling out of sorts and that she’s living on her own, trying to make life work as an independent person. When a stunt designed to prove once and for all that she’s put Joker behind her catches the attention of everybody in Gotham City, she sets off a chain of events where the newly ascended crime lord, Roman Sionis, decides to take revenge on her just because he can. When a young child manages to steal a treasure that would make him the most powerful man in the city, Harley is sent on a quest to find the child while the two of them are hunted by every mercenary and police officer in the city.

There’s a lot going on in the story with a large cast of characters. Right off the bat I’ll say the best thing about the film is the performances. I had the same thought in Batman vs Superman and Suicide Squad. Whatever can be said about the script, these actors are all eating up their screen time and saving every minute they get.

The film is very much Harley Quinn’s movie and Margot Robbie does her best to steal the show. She’s the one having the most fun with her role and she brings everything she has to her character. Ewen McGregor is on hand as the villain, portraying a very different interpretation of the Black Mask. He finds a unique energy playing the entitled misogynistic son of a crime family who enjoys wielding power like a toy. Rosie Perez does an amazing job playing a beleaguered, cliche 1980s cop with a chip on her shoulder. Mary Elizabeth Winstead possibly delivers the best performance of the film as the purposely understated Huntress. Hers is the most minimalistc role in the film. Yet out of all the characters, the movie finds its best groove with her. She’s a woman whose entire identity has been shorn away by her trauma to the point where she’s dedicated herself single-mindedly to revenge.

Sadly like many other films in this franchise, I found myself walking away with the same thought: “I would sure love to see some of these actors in a better movie.” 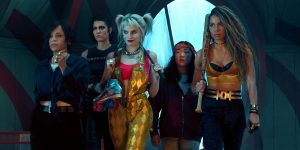 Like many DCEU films, Birds of Prey is a garish, overly designed, preachy mess with some legitimate highlights in the action, comedy and casting department. It’s a movie that was created first and foremost to fetishize an aesthetic which long overstays its welcome. The production design looks both sickly with its overdone pastel colors, and punk/counter-cultural fashion design.

Like most messy films, the storytelling problems aren’t something immediate or identifiable. I could point at the tone and say how it feels both immensely cartoony and somehow not cartoony enough for a story with this many one-dimensional characters. I could point to the fact that there are elements and characters in the film that show up and don’t serve the overall narrative. I could point out a major beat in the middle of the film where a character’s home gets destroyed yet there are no consequences in the actual story. It’s really just an issue of focus though. I don’t think these characters earn their character arcs. Huntress, Black Canary, Montoya and Harley all show up fully formed following their introductions, and the film proceeds to focus entirely on contriving a scenario to force them into a team. Maybe this could’ve been a story about how these characters’ relationships helped them overcome their personal traumas and build new lives, but the team doesn’t become a thing until the final 20 minutes.

Its ambition as a breakup comedy is undercut by an under-focused script that doesn’t give any of the characters what they need to make the film work. For a breakup movie, the story doesn’t seem all that interested in how these series of events speaks to Harley’s healing process. It’s just a series of coincidences and consequences of her going on a drunken rampage that the movie doesn’t really comment upon. If this is a story about her healing, why does it start with her making a bad decision and suffering as a result of it? Is the movie discouraging binge drinking? Not really. What does helping a child escape a mob boss have to do with creating the relationships and self-actualization necessary to overcome heartbreak and codependency?

What makes the best films in the DCEU work, like Wonder Woman and Shazam!, is a commitment to a central narrative and theme. These films feel utterly unique in their genre and they’re complete stories where their characters learn something and evolve. The worst films in this franchise wallow in their admittedly impressive visuals and performances. Birds of Prey is the latter. I suspect there’s going to be a pretty solid fanbase for a film such as this with characters like this and we wish all the power to them. The DCEU has its fans for a reason. They’re unique, ambitious and stylish films. They don’t work for everybody though.

Thankfully the things that do work keep the film from totally falling apart. The second-unit team really showed up to play and we get a handful of fun set pieces. Best in show is a Terminator–inspired raid on a police station early in the film by Harley Quinn. As a result, the film manages to be a few notches better than something like its predecessor film, Suicide Squad. That said, I think a lot of people are going to be left cold by it. 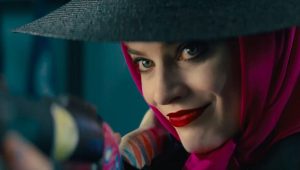 Birds of Prey is likely to go down in the same category as 2016's Suicide Squad. It's a cinematic oddity with garish production design that does legitimately appeal to a small but loyal group of people. To them, they'll enjoy this film. To most people, I suspect the film will merely be forgettable or irritating.