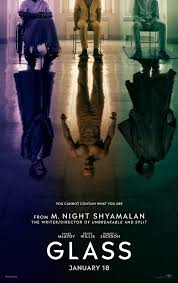 After the surprise success of 2017s Split, M. Night Shyamalan is back with his surprisingly anticipated follow-up that brings back the characters from his beloved cult classic superhero drama Unbreakable for one of his most ambitious films yet. With this much anticipation and support behind him, how does the one-time wunderkind do with such high expectations?

Violence/Scary Images: Fighting, punching, biting, one character has his throat slit offscreen, and some blood depicted.

Drug/Alcohol References: A scene set in a bar.

Spiritual Content: Superheroes are referred to as Gods among men.

Positive Content: Themes about the importance of belief and the power of storytelling. 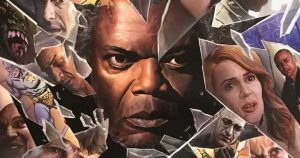 I should say upfront that I’m far from an M. Night Shyamalan fanboy. I’m acquainted with his original trilogy of Sixth Sense, Unbreakable, and Signs that briefly made him one of the most sought out directors in Hollywood and I’ve seen a few of his recent reviled films like The Last Airbender and The Visit. His reputation as a once great artist who has fallen from grace proceeds him. It didn’t surprise me when Blumhouse picked him up to be a director at the time when Jason Blum was a producer most well known for peddling cheap schlock and hadn’t produced Get Out and Blackkklansman yet. Bringing on a fallen titan to his label seemed like the kind of gimmick that could get attention.

That said, his 2017 film Split took me by surprise. I was expecting a shallow, a cringy horror film made on a low budget but what I got was a compelling piece of art. The movie was actually creepy and well-executed despite its budget of a mere $9 million. A lot of his had to do with James McAvoy’s one-man show of a central performance that sold the role of its gimmick naturally and added a sense of effort and thoughtfulness to a production that was otherwise little more than a sleazy kidnapping movie. Then, of course, there is that insane post-credits scene.

Tying the events of the film back into the universe of Unbreakable was a moment of genius. Not only did it color the events of the film by alluding to the themes of the previous movie, but it also harkened back to the classic days of Shyamalan’s roots with the promise that some of his most well-realized characters and themes would be coming back. Naturally, the sequel to that became one of the most enticing sequel concepts in quite a while.

Glass is many things. It’s pretentious, cheap looking, audacious, enthralling, confusing, ambitious, and angry all at once. The movie is getting extremely split reactions out of viewers with many people appreciating its strange complexity and others disdaining its illogical story and insane ending sequence. It’s a long-winded, highly-ambitious, and thematically complex attempt to expand upon Split’s themes of trauma, a continuing deconstruction of the superhero genre from Unbreakable, and a highly self-serious metaphor for Shyamalan’s tortured relationship to film criticism. This last theme is by means of a thematic exploration of the power of great people to inspire others and help them believe in things greater than themselves being constantly held down by forces around them.

One can appreciate that the film seems to deliberately embrace making a story this complex in the superhero genre in such a muted fashion. While it’s clear most of these decisions were made because of its low budget, the movie casually brushes off its limited scope, cheap locations, and awkward coverage as intentional artistic decisions. It’s not a spoiler that most of the film takes place in a mental institution where the three titular characters are being treated on the assumption that their superpowers are merely delusions of grandeur.

It poses a fascinating philosophical question about whether the trauma of their experiences is the source of their strength or merely enabling hallucinatory delusions. In a sense, the film is stripping down the superhero genre to its bare bones to ask tough questions. These circle around the legitimacy of the genre as a means of inspiring people and whether or not the trauma it would take to become a character like those in comic books would actually make you stronger. Frankly, it would appear most of these decisions are intentional, if extremely cynical. Unfortunately, the ending that they are in service to doesn’t build upon them in a flattering way.

A lot of the film’s discussion centralizes around the insane finale involving between four or five major plot twists that severely rewrite the plot/themes of the movie in strange ways. Truthfully this is more head-scratchingly confusing and hilarious than frustrating. Several of the plot twists don’t make any sense and don’t contribute anything to the themes beyond making the characters briefly react violently. The ones that do have thematic relevance only serve to make the film more indulgent and indignant. Unfortunately, the twists build off of the film’s central theme of questioning the legitimacy of these character’s beliefs in their own powers. This is portrayed in such a way that it’s hard not to get the sense that Shyamalan is mad that anyone would dare question the mere idea that these people are self evidently spectacular and inspirational. It’s not hard to draw conclusions that this ending is, in a sense, a reflection of Shyamalan’s frustration with his critics.

I’m really tempted to say that I’m in love with this movie’s audaciousness and sincere disdain for its critics if only because it’s coherent. That said, the themes for all their intentions are ultimately in service to Shyamalan’s egotistical victory lap for Split being successful than it is a sincere celebration of the superhero genre or a pep talk for people suffering from traumatic experiences.

There have been plenty of deconstructions of the superhero genre like Super, Kick-Ass, Watchmen, and Unbreakable before this and while they all come to different conclusions about what superheroes would be like in real life these films ultimately come around to the genre that spawned them. Split was a good horror film because it put horror and themes at its foundation at a moment when Shyamalan needed a hit. Glass uses its themes to tell a story of Shyamalan lashing back at the people who criticized him. That said, I find this angry coherent voice compelling if not logical. I’ll take that over most of his recent films any day.

Glass is awkward, starred by several actors who clearly didn’t want to be there, spoken through the prose of extremely awkward dialog, logically contradictory towards its predecessors, and scarred by interminable self-seriousness that may be just a front to cover for the lack of a budget. That being said, Glass is also terribly fascinating. It’s the kind of personal film that can only come from an artist with a voice. As a sequel to Unbreakable and Split, it’s likely not what most people are looking for. As an M. Night Shyamalan movie, it’s worth the viewing. 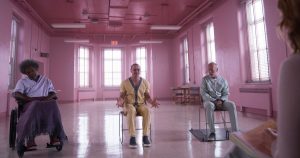 Glass is fascinating, confusing, and likely to spark a lot of interesting discussion for good and ill. Apologists for M. Night Shyamalan will find much to point at and proclaim its brilliance but his critics won't have a hard time dismissing this film either.