Review: Once Upon a Time In Hollywood 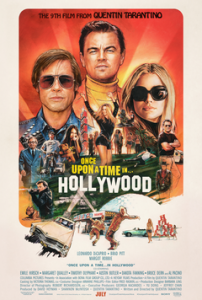 Two years ago, in proximity to the passing of one-time cult leader Charles Manson, Sony Pictures announced the release date of Quentin Tarantino’s ninth film Once Upon a Time… In Hollywood would be released to coincide with the 50th anniversary of the murder of Sharon Tate. While the date was pushed up a few weeks, the date has arrived and one of 2019’s soon to be most talked about films is here.

Sexual Content: No sex or nudity depicted, some references to sex. 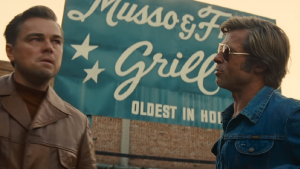 Why’s the release of a new Quentin Tarantino film coupled with controversy? The now rapidly-advancing-in-age director doesn’t seem to be losing his edge in terms of his ability to push buttons as he pushes towards his 60th birthday and the long prophecized end of his career. The director has promised to conclude his prolific and controversial career at ten films. It remains to be seen whether he’ll be directing his final film as a Star Trek movie, a Kill Bill sequel, or something completely unexpected.

Regardless, Once Upon a Time… In Hollywood seems to be a movie almost defined by Tarantino’s need to deliver in his final stretch, and my goodness did he ever deliver. You could almost read the film primarily as a metaphor for him trying to get everything out of his system at once. Once again it’s story taking place in his favorite setting of Los Angeles but differs because it’s a period piece set in 1969, a film about filmmaking, a film about westerns and an alternate history retelling of one of the most horrific events of the summer of ’69.

Tons of Tarantino’s frequent collaborators show up in minor roles and the broad stretches of the movie’s themes, tone, and story all reflect Tarantino’s pop culture fixation and love for grindhouse cinema. As quintessential to Tarantino this film is going to be extremely indulgent and yet everything fits together in the end. While major celebrities and historical figures at the time as well as major actors show up and disappear quickly they all serve their purpose in pushing the story forward. Much of it comes off as somewhat wasteful but it’s clear that Tarantino wants to give all of his favorite people and things at least one more visit before he calls it quits. 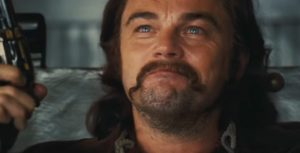 The main story follows the lives of two men going about their daily business over the course of two days set six months apart. Rick Dalton and Cliff Booth are an actor and his stuntman, respectively, who came to prominence on a famous 1950s western TV show and now find themselves out of place in modern Hollywood. Dalton has the opportunity to participate in Spaghetti Westerns in Italy but is initially reluctant to do so while Cliff is making a living essentially just functioning as his thankless all-purpose assistant. At the same time, we see a young Sharon Tate and her husband Roman Polanski roaming around Hollywood as the hottest young couple in town and fresh off the success of Rosemary’s Baby while gangs of hippies hitchhike their way around the city.

References are a huge motif. The movie is utterly drowning in references to obscure late 1960s ephemera only Tarantino seems to remember. I’m sure this will probably be off-putting for some other viewers but in reality, it seems Tarantino is building up 1969 as a fantastical setting in of itself. The year and place to him are a massive carnival ride and he finds immense joy in just letting the movie recline, drive down the street under the neon lights, and enjoy the radio.

Just as Django Unchained lets you live in a facsimile of a western, Hollywood wants to craft a realistic representation of a fantastical 1969 you’d want to visit. It calls to mind the deeply romantic revisionism of American Graffiti and Stranger Things in regards to imagining a timeline where all of the best things from that time trump the worst things going on. This isn’t 1969 as seen through political unrest, the Vietnam War, political assassinations, and the counter culture. This is Disney-land 1969. 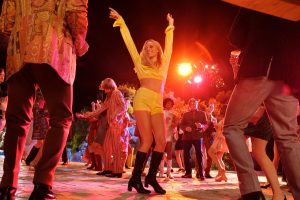 That extends to the movie’s now-infamous historically revisionist ending. The film’s finale is probably going to be the thing that makes or breaks the experience of the film for most viewers. Prior to then, the movie was a deliberately paced hangout movie set in a fanciful version of its setting but the finale elevates the story to the entirely fantastical. Combine Tarantino’s tendency towards ultra-violence with his fascination with changing history and you’ll see how this is going to leave a lot of people scratching their heads.

Considering both main characters are drunk or high during the sequence it even calls into question to what degree we’re supposed to be taking this series of events as literal since we know that this wasn’t historically how this went down. In the end, though like the rest of the film it’s a fantasy. Maybe the darkest joke the story tells is offering a happy ending to a real-life tragedy and asking what could’ve been.

That’s nothing new with Tarantino of course. He’s been changing history flagrantly since Inglorious Bastards ended with Hitler’s assassination. The question for me though is, what is such a plot in service to? Contrary to his frankly frivolous, indulgent, and unrestrained public image, he’s an immaculate director who puts a lot of thought into every interaction and story beat he screens in his films. Much of the film’s discourse as a whole surrounds the way that Rick Dalton seems to be a functional stand-in for Tarantino himself, an older filmmaker nearing the end of his relevance who is struggling to decide how to move forward. To quote Kate Rife of A.V. Club, it’s his “wistful midlife crisis movie.” That certainly colors the movie in fascinating ways. 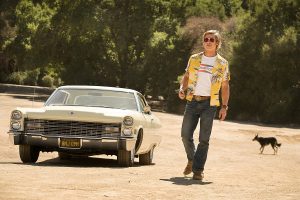 Does that make the movie’s indulgent portrayal of the 60s and its revisionist ending merely a fantasy for the director or is he reaching deeper and trying to wrestle with such impulses? Maybe that’s the role Cliff plays. His character is the reverse of Dalton’s. He’s mostly resigned his life to a supplementary part assisting his friend but he’s much more at peace with circumstances. While it’s implied it may or may not be the result of him having committed murder before the film started, he’s achieved some level of contentment. It’s probably no coincidence then that these two characters start the film as partners. Cliff’s job is to do Rick’s job when it’s too dangerous. The movie’s plot is entirely based on Rick’s relative codependency with his partner.

There’s certainly a great deal to consider with any Tarantino film. It’s a movie deeply planted in the zeitgeist that marinades in the culture that surrounds it and yet it feels more disconnected from reality than the majority of his historical fiction work. I can’t say I fully understand what it’s trying to say about the director or the culture we’re living in now but upon multiple viewings, I suspect that answer will present itself. Once Upon a Time In Hollywood isn’t an easy film. It’s extremely slow and evolves into something extremely brutal and most audiences probably want to go see a Tarantino film in the style of Kill Bill or Django Unchained which comes with more action and catharsis. At the same time though the movie has etched an immediate and unique identity and space for itself outside of the norms of most genre films.

It’s one part Pulp Fiction, one part Dazed and Confused, one part Hail, Caesar, one part The Otherside of the Wind, and entirely Tarantino. I’ve met a lot of people who say their first reactions as something like “it’s not my favorite of his films but it’s very good.” On the contrary, I would suppose this film is going to age similarly to Inglorious Bastards. Five years from now this is going to be one of the films a faction of his most aggressive fans will hold up as his masterpiece. 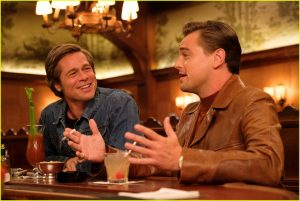 Once Upon a Time in Hollywood is not a film everyone will love but it will likely go on to be 2019's most talked-about film!