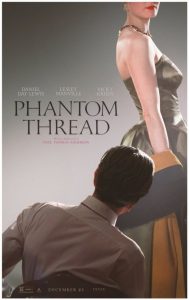 Paul Thomas Anderson returns to the director’s chair for the story of Reynolds Woodcock, an eccentric fashion designer in 1950s London who falls head over heels for a young woman. Daniel Day-Lewis’s final performance as the enigmatic Mr. Woodcock gives us one of the greatest of his storied career and yet another masterpiece in the pocket of one of our greatest living directors of cinema.

Sexual Content: A woman appears partially unclothed as she is being fitted for a dress.

Drug/Alcohol Use: Some alcohol consumption.

What defines a Paul Thomas Anderson film? Paul Thomas Anderson isn’t merely a great filmmaker. He’s a filmmaker whose works exist in a place of near cinematic perfection. Whether you’re talking about the fluidity and energy of Boogie Nights or the deliberate Kubrick-esque meditation of There Will Be Blood, what defines him is an abnormally excellent ability to envision and execute whatever happens to be on his mind. It would be easier to describe the nature of this execution if the nature of his storytelling and filmmaking hadn’t evolved so swiftly across the course of his eight feature films. The economy, energy, and edginess of his earliest works have largely been supplanted by a filmmaking of unrelenting formality, symmetry, and thematic depth. The man who was loud and excited in his youth has cooled down but hasn’t lost the fire. Now that fire is more well-harnessed than ever.

His newest film Phantom Thread is Paul Thomas Anderson’s best work since There Will Be Blood. That’s a radical statement considering the decade since 2007 in which we’ve had to contemplate There Will Be Blood has lead to a critical consensus that says that the film isn’t merely a masterpiece but the greatest film of its generation. This isn’t of course to berate his intermediate work like The Master and Inherent Vice. Both of those films have rightly developed well-deserved critical appraisal. It is, however, to say that Phantom Thread is something of a quiet masterpiece in its own right.

Considering the collaborative nature of filmmaking it’s rare to say that a film is entirely the work of one man. In a recent reevaluation of mine of the Coen Brother’s No Country for Old Men it struck me that the film that is widely opined as the strongest film in the collective filmography of two the greatest living Hollywood directors would be the one that had the least involvement in the writing. That story was initially Cormac McCarthy’s critically acclaimed book before being adapted for the screen. This brought to mind a recent article by film critic Kyle Smith who meditated on the idea of the classically understood idea of the filmmaking auteur (the central author of the film who is awarded the full credit of the film’s vision) as something rather overblown.

As his example, he explored Michael Curtiz’s beloved Casablanca in which he alludes to the troubled nature of the production where in entire segments of the script were unfinished near the beginning of production and entire sequences of the film were shot by another director. His ultimate point, of course, is that filmmaking is a collaborative effort cheapened by the idea of the all-knowing, all-powerful director. He makes a compelling argument against the idea but in retrospect, it is rather difficult to argue with the results of what Paul Thomas Anderson was able to do with Phantom Thread.

In June of last year, as production was nearing completion on principle photography it was reported that Robert Elswit, Anderson’s six-time cinematographer, had been unavailable to work with him on the film. As a result, Anderson himself largely took up the mantle of cinematography duties for the film in addition to writing, directing, and producing the film. This isn’t, of course, to downplay the hard work of the hundreds of people it takes to direct a film as large as this but it goes to show just how singular the film is to his vision and artistic abilities that he directly held the reigns over so much of the film. The only other American filmmaker I can think of who tries to do that is Steven Soderbergh whose directing credits are often accompanied by the work of screenwriters, editors, and cinematographers upon whom background checks may reveal do not actually exist.

This is a bit factious at the least as actor Daniel Day-Lewis purportedly did have a major role in assisting with the developing of the film’s ideas. If anyone truly deserves immediate credit for his work in the film it’s Day-Lewis himself. Few actors can fully imbibe a role to the degree that Day-Lewis and his infamous style of method acting have managed across the course of his career. Most recently this arose in the production of Steven Spielberg’s Lincoln where purportedly Day-Lewis remained in character to keep his accent for the majority of the time outside of shooting. In previous shoots such as Michael Mann’s Last of the Mohicans, he prepared for the part by learning to build a canoe and during the interim of There Will Be Blood and Phantom Thread he learned how to be a fashion designer for the role.

Considering this is purportedly his final acting role before retirement it would make sense for him to go all out. His vision for the central role of Reynolds Woodcock is a rather exquisite one. Here Day-Lewis forgoes much of bombast and presence of his previous roles for a quieter and more subtle character. Woodcock is a genius of his industry amongst the elite of 1950s fashion designers who work amongst the greatest elites of his time. Fully aware of the greatness of his ability his life is fully dedicated to a perfectionistic image and lifestyle that must be upheld for the sake of his art.

Day-Lewis’s is a performance of quiet terror where much of the film’s drive comes from other characters merely having to operate in the same space as his role and watching as small infractions on his life come to be responded by loud outbursts of rage. Many sense the character fascinatingly parallels Day-Lewis himself. It’s hard not to imagine the role of an intense artist struggling to attain perfection being so attractive to an actor as intense as Day-Lewis is. In some senses that may actually be a bit too revealing on the part of Day-Lewis if he would consider this something that speaks to him as an actor.

Taking into account of how much ink has been spent on the matter of walking on eggshells regarding the film’s plot and spoilers I won’t be the one to forgo the matter. Needless to say, it’s a film that is best to see with a clean slate of expectations. There is a reason the film is about fashion designing. Without spoiling anyone’s experience, it’s fundamentally a story about the nature of the surface of things. The film has an inordinate amount to say thematically regarding ideas of toxic relationships and the nature of artistry but part of the clever trick is to slowly reveal and unfold into what the film is trying to say. Fascinatingly in this regard, the heavy hitter of the film ends up surprisingly not being Daniel Day-Lewis.

Actress Vicky Krieps does an excellent job meeting and exceeding Lewis’s performance at times as her role as Woodcock’s lover Alma and ends up serving as the main driving force of the film’s plot for a surprising majority of the film’s screen time. In another movie, Alma’s role might’ve ended up merely relegated to the role of a B-character or someone whose opinions are limited. Instead, Alma’s role drives the entire plot of the film and finds her as a soul who is capable of matching Woodcock’s intensity.

Technically speaking the film ranks itself as one of the most pristine films of 2017. As with all of Anderson’s films, we see a logical exploration of the themes through the use of the camera. This is of course famously remembered in There Will Be Blood during the early church scene where the pastor exorcises a woman and the camera shows the perspective the entire time of the would-be devil himself. Anderson always uses the camera to help communicate information in his films. Boogie Nights’ free-floating camera brings energy and color to the story and, as a fellow cinephile friend of mine worded it, puts you right there in the scene (for better or worse). Inherent Vice chokes the camera with a hazy, claustrophobic gloss that puts you right up close and personal with these characters as it proceeds to pile on names as part of its convoluted story. In a movie about burnt-out hippies and paranoid government officials, that’s an appropriate use of the camera.

In Phantom Thread the keyword for the film’s production design is restrained. The Anderson still moves the camera with precision and artistry but it’s never showy. That same friend of mine who talked about Boogie Nights told me that he walked away from the film feeling rather emotionally distant from the proceedings. While I concur to some degree I feel that the film is a bit distant I think it’s worth noting that this is part of the point. As I said earlier the film plays with the idea of surfaces providing a beautiful cover for toxic and unhealthy things.

While the film’s production design, cinematography, and music dress the film up as appealing and talented, while simultaneously positing that these are at least people we ought to be sympathetic towards, the film ultimately comes down on the point that they aren’t really good people. The movie offers us a very nuanced vision of our lead character’s relationship that posits that they are valuable people who are trapped doing immoral things.

Paul Thomas Anderson has once again crafted something of interminable worth. If it weren’t for its incredible mastery of the craft I would say it’s almost workman-like coming from him but a director like Anderson makes films like only a master can. Phantom Thread is every bit as lovely and beautiful as it is contemplative and morally scolding. As a (theoretical) swan song to the career of one of our most intense and talented actors it serves as the ultimate reminder of what we are losing should he hold strong to his commitment to fully retire. Until we find out for sure we at least have Phantom Thread and that’s more than enough. 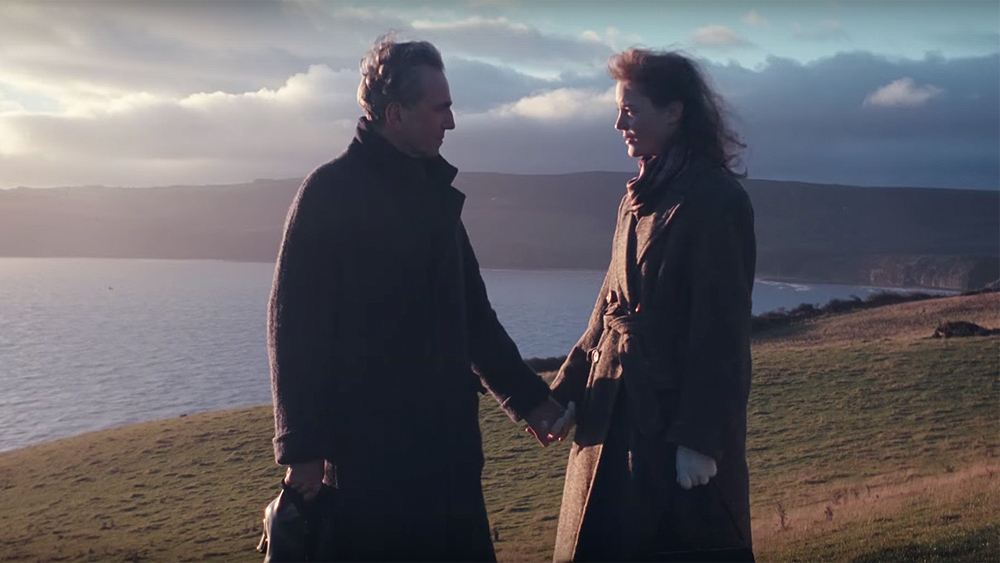