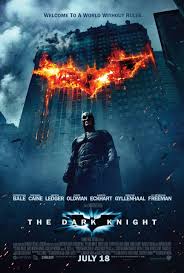 After watching Batman Begins for the first time I was beyond excited to see the second part of Christopher Nolan’s masterful Batman trilogy. I remember, at the end of Batman Begins, seeing Jim Gordon hand Batman a joker playing card and freaking out. Knowing how Christopher Nolan has a tendency to make his movies as dark as possible, I knew he could take the Joker and make him as violent, insane, and smart as possible. He did just that.

The Dark Knight is strong right from the beginning. It opens with a bank robbery. A small group of extremely well-organized criminals each do their part in the robbery, but while they are working they are talking about their boss who seems to be the Joker. One by one they start killing each other off while working to eliminate shares in the money they steal, and at the end the one who is left standing turns out to be the Joker. His first words will send chills down your spine. As a bank manager (a cameo appearance by William Fichtner of Black Hawk Down and The Lone Ranger) is wounded, he taunts the Joker by saying that criminals in this town used to stand for something and asks him what he believes in. The Joker slowly approaches him and, after shoving a grenade in his mouth, says, “I believe whatever doesn’t kill you simply makes you…stranger.” He then pulls off his mask and smiles before he walks into the getaway bus and drives away. After this strong of an opening, I knew this was going to be the best Batman yet.

As with its predecessor, The Dark Knight also has many meaningful quotes and life lessons that shine a glimmer of hope into what seems like constant darkness, my favorite of those being a conversation between Alfred and Bruce. At a time in the movie when it seems like The Joker has won and that all hope is lost, Bruce is out of ideas and close to throwing in the towel. He asks Alfred, “What would you have me do?” and Alfred simply replies, “Endure, Master Wayne.” To me, this is the crowning moment of the movie and deeply resonated with me from a Christian perspective. A lot of times in our walk, we face a period when we feel like all hope is gone. We feel like the only thing we can do now is give up. At this time, we cry out to God and ask him, “What would you have me do?” and he simply replies, “Endure, child.” We must endure through the trials and temptations that test us most; only then will we become stronger. 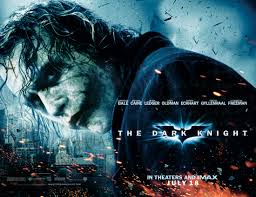 Christian Bale (Batman Begins, The Prestige) returns to the role of Bruce Wayne and improves upon his performance in Batman Begins. He brings the sorrow, pain, and anger inside of Bruce Wayne’s heart to the forefront and does it almost flawlessly. Michael Caine (Batman Begins, Now You See Me) plays Bruce Wayne’s butler Alfred. His charming, caring, and charismatic performance truly shows the love he has for Bruce. He was perfectly cast for this role. Heath Ledger (10 Things I Hate About You, A Knight’s Tale) plays the antagonist in the story, The Joker. Heath turns in an Oscar-winning performance and steals the show with his acting acting. I have never seen someone get so into a role. He really makes you believe he is an insane killer. Gary Oldman (Batman Begins, Harry Potter and the Prisoner of Azkaban) plays detective Jim Gordon. As with Batman Begins, I still feel that he is not the right person for the role. Though he does give a good performance, he still does not have the gritty personality. Aaron Eckhart (Battlefield Los Angeles, Rabbit Hole) is another newcomer to the trilogy and takes on the role of Harvey Dent/Harvey Two-Face. Eckhart gives perhaps the best performance of his career in this film by having to play both a good guy and a bad guy, and he flawlessly transitions from one to the other. Maggie Gyllenhaal (Crazy Heart, Donnie Darko) replaces Katie Holmes for the role of Rachel and does much better at the role. She brings Rachel’s strength to the forefront and does a great job at it. Morgan Freeman (Oblivion, The Shawshank Redemption) Plays Lucius Fox. Freeman’s screen presence is so strong that, even with a small role like this, he can still give a fantastic performance.

Christoper Nolan (Batman Begins, Inception) returns to helm the second part of the Batman trilogy. This time around, he brings his signature dark and ominous filming style to the movie and truly makes it seem like all hope is gone. He is a director who is at the top of his game and is quickly becoming the best out there.

And finally, the score of this film is also fantastic. It’s hard and heart-pounding during the suspenseful parts ,and soft and sad during the emotional parts. It fits a Batman film well.