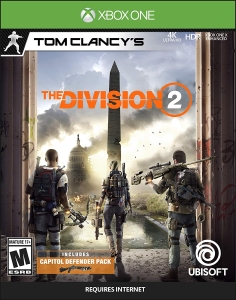 After a fantastic time playing through its predecessor, I was excited for Tom Clancy’s The Division 2. The original was a fun game to whittle away with friends, but the release version initially left me looking for more to do. While Ubisoft provided content updates, I never got to go back to it, but the time I spent was enough to get me revved up for the sequel. More gameplay options, more missions, and a new location promised to be something fans could sink their teeth into. Now, nearly 70 hours later, I’m happy to say The Division 2 did not disappoint. 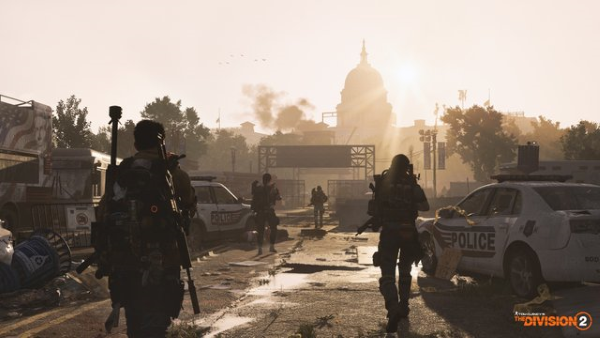 Spiritual Content: One of the villainous factions involved favors their leader with a fervor that can only be described as zealous. Since she’s an asymptomatic carrier of the virus causing so much devastation, people think she’s above it. They even sacrifice themselves for her cause, hoping it will win them favor in her eyes.

There are other references to various people and their former stations in life. One bounty that particularly stands out was a priest-turned-militant who forced his congregation to drink communion wine laced with poison. The survivors became members of his army.

Violence: The Division 2 is full of violence. Most of it is animated so people just fall over and die when they’re killed. Combatants can be caught on fire and electrocuted. There are screams of pain and anguish from the enemies you fight. There are world events where enemy factions will shoot civilians in the head, point-blank, unless you intervene to save them. There’s no gore or viscera in the gameplay itself, however.

That said, the extra content you can collect (cell phone conversations, security camera footage, etc)., is full of disturbing violence seen in action. One shows the aforementioned asymptomatic carrier with the man who designed the walls of the quarantine zone. She condemns him, holds up a hammer, and says, “Everyone will have a turn.” He urinates himself and she’s shown hitting him in the head with a hammer. 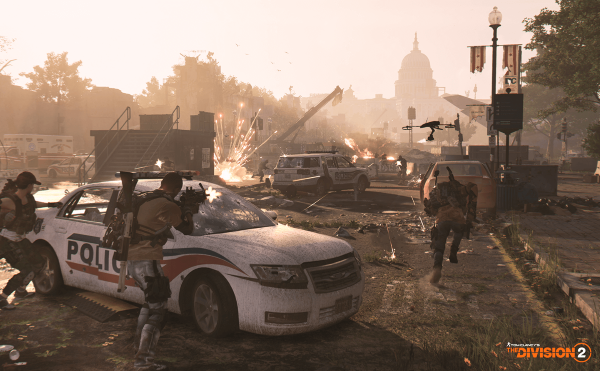 Another video shows one of her zealots with a bomb strapped to his chest. Talking with a cohort, he’s told the leader will remember his bravery. He runs at a group of civilians, who see and shoot him. He then manages to stand up, take a few more steps toward the crowd, and detonate the bomb. As the smoke clears, nothing is left on the street. They’ve all been blown away.

Language/Crude Humor: Have you ever experienced a single word so much, you simply got tired of hearing the word? That’s how The Division 2 treats the F*** word. Without hyperbolizing, The Division 2 easily has more profanity than any game I’ve has ever played. In 80+ hours with the title, I’ve probably heard the F*** word 3,000+ times. Nearly every run-in you have with an enemy group will have at least one F*** word, often with some S***, G**D***, and D*** sprinkled in for flavor. The language in this game is NOT suitable for children or people sensitive to profanity.

Sexual Themes: There is no sexual content in The Division 2.

Positive Themes: There are themes of valor, honor, and the will to do the right thing, even when the world is falling down around you. 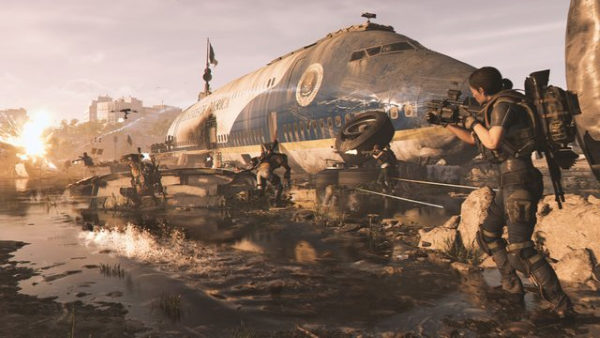 As the Destiny franchise and original Division have shown, there’s an undeniable audience for loot shooters. The crossover between shooting firearms, acquiring random gear, and balancing skills a la Diablo has proven to be both fun and addictive. Enter Tom Clancy’s The Division 2. Though the man himself passed over half a decade ago, his legacy of political powderkegs and mysterious military force lives on.

With Division 2, gameplay is king. As a big, open-world loot shooter, they provide a whole city to explore with plenty of opportunities for firefights. The mission design is phenomenal. In 85+ hours, I’ve not felt like encounters within story missions were anything less than expertly assembled. It feels each room’s designer was obsessed with what they were delivering and it shows. 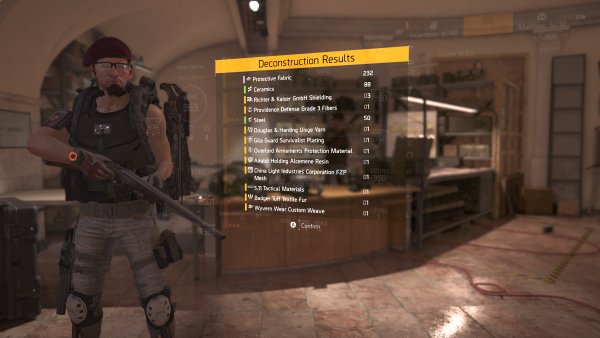 The core loop is fun, too. Gunplay feels tight (yes, enemies are “bullet spongy”, but that was to be expected from a game wtih RPG mechanics. Tougher enemies have more hitpoints and armor to work through). There’s a wide variety of guns to utilize and each can be customized to your liking. Loot drop rates feel consistent and rewarding, even through post-game content. There 8 abilities to get, as well, each with 3-4 varieties to match your play style. On top of all that, you can craft and re-work gear in case what you’ve already got isn’t cutting it.

Between missions, you’ll want to fill time with open-world activities. These can range from taking over control points from enemy factions (netting you some gear, XP, and a fast-travel point) to stopping public executions and radio broadcasts, to hunting down bounties for a bit more challenge (and reward). Control points can get repetitive and post-campaign, enemy factions will take them back. My primary complaint, however, is that folks wanting to focus on the campaign will find they are forced to do side content since you have to hit level 30 to participate in the final story mission. I levied a similar complaint against Anthem, though Bioware’s version of this was far more heinous.

Where the original Division lost its flavor by funneling end-game players into the Dark Zone for high-stakes PVP—a mistake they remedied with DLC over the game’s lifespan—Division 2 launches with substantial offerings beyond the campaign. When the core story ends, they ramp up the difficulty and offer players some higher-end PVE challenges to tackle. The Dark Zone is still there, of course, if you feel like trolling folks (or possibly being trolled) for the opportunity of particularly rare gear. Ubisoft has also added Conflict, a 4v4 PVP suite currently offering Skirmish, their equivalent of Team Deathmatch, and Domination modes. Along with all that content, the developers have already announced that they’re working on 8-player raid missions to amp up difficulty and cooperation. I say as long as they plan to provide PVE content, I’ll keep consuming it. 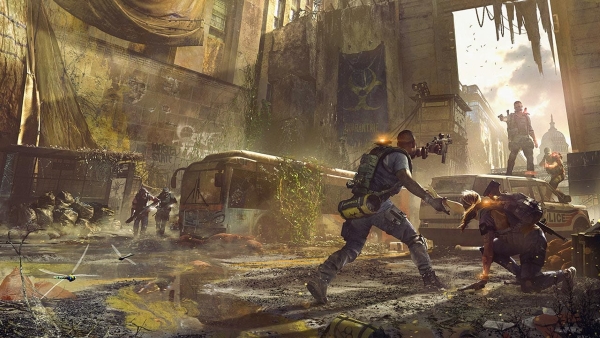 The story (or lack thereof) particularly seems to highlight the absence of the game’s namesake. Set six months after the events of the original, the scene has shifted. In the wake of what happened in New York, Division agents are fighting across the country. Your character is pulled from the middle of combat to answer a higher calling; Washington D.C. has been hit and several nefarious factions are holding the nation’s capital to their whims.

The problem is that nothing within that scope ever otherwise stands out. You’ll learn each faction’s leader from sheer repetition of name, and if you dig through collectible material, you may get a better understanding of who they are. Apart from Manny, who keeps track of the moving pieces with toys on a map, you’ll never know the names of any other good guys. There’s no personal attachment to anyone. You’re just a nameless, voiceless killing machine with one primary objective: slaughter as many villains as possible and eliminate the factions to return order to D.C. 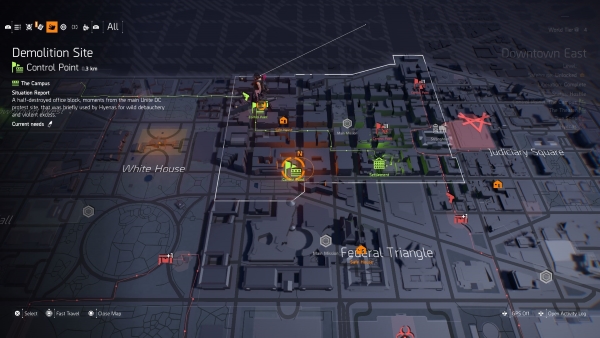 The game’s soundtrack is actually pretty catchy. Though much of it is ambient, tense situations are highlighted by music with a catchy sort of 80’s synth vibe. Voice acting in the game is passable but there are no standout performances save your computer assistant, ISAC (pronounced like “Isaac”). His voice only becomes notable because you’ll hear it any time a world event occurs like finding a collectible or joining up/disbanding from other human players. It actually becomes almost comical at times.

Visually, Division 2 feels like a near clone of Division. Yes, you’re in D.C. now instead of New York, but everything is still there from the first game. Cityscapes in ruins, bags of trash, beat up cars, and bodies are all over the place. There are landmarks that are cool to see and plenty of customization options like gun skins and various aesthetic items, but it’s an otherwise unremarkable game to look at. 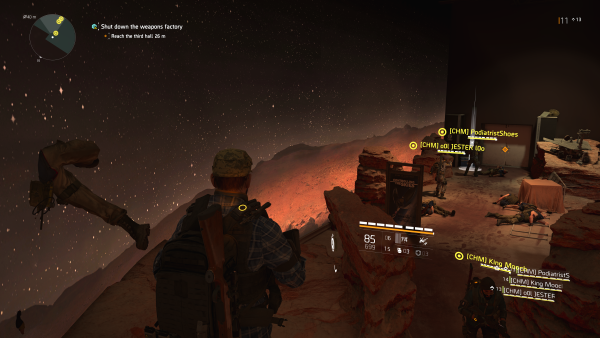 While the game has a few bugs, a forgettable story, mediocre visuals, and abominably foul language, the gameplay loop is fun and addictive with plenty of opportunities to customize your loadout. The game is clearly meant to be played with a group of 4, but there’s a good time to be had matchmaking with other players if you don’t have a group at the ready. I also can’t recommend teens or children play this game (hello, heed the Mature ESRB rating!). For the discerning adult looking for a game to pass the time with some buddies, Tom Clancy’s The Division 2 is a prime factor.

While the narrative in The Division 2 suffers from weak characters and the visuals feel worn, the gameplay and mission design in this fantastic loot-shooter will keep you and some friends engaged for weeks.